Never mind what Season 3 of Colony is actually about — Sarah Wayne Callies merely hopes that Katie Bowman makes it out alive.

As for what Season 3 will look like in the wake of the sophomore finale, the short answer is: very different. Says Peter Jacobson, “This is a global occupation, so there are many places for us to go,” especially now that rendition has turned the Los Angeles bloc into a “quiet, lonely place,” Condal notes. 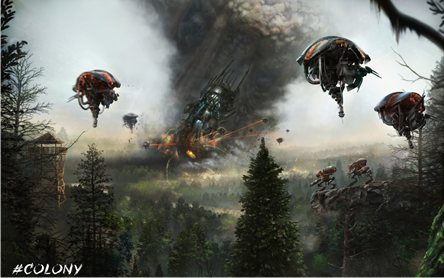 Also in the video Q&A above: Jacobson begins to talk about “ramped-up” “alien activity,” before getting hushed by castmate Tory Kittles; Callies promises a pleasantly surprising amount of mythology reveals in the Season 3 premiere alone (and mulls the prospect of more Prison Break); and the EPs discuss for just how many seasons they think this story can be told.

During the “occupation” drama’s actual Comic-Con panel, concept art (above right) for an upcoming “battle”  was revealed, as was the sizzle reel below: