There are quite a few puzzling aspects to The Last Tycoon, but the biggest head-scratcher of all is: If your studio executive looks like Matt Bomer, why not just put him in all your movies?

Bomer’s matinee-idol looks are certainly put to good use in Amazon’s retro Hollywood drama (debuting Friday, July 28) — he looks damn good in a tailored suit and fedora — but like a lot of The Last Tycoon, the substance falls far short of the image. Plagued by corny dialogue and clumsy plotting, this ambitious series aims for the stars but plays more like a first-weekend flop.

Based on F. Scott Fitzgerald’s unfinished final novel, Tycoon centers on Monroe Stahr (Bomer), who produces movies — sorry, “pictures” — at a thriving fictional studio in 1930s Hollywood. Monroe is a commanding presence on the studio lot (with a face like that, how couldn’t he be?), but his confident smile hides a tragic past: His wife Minna, a luminous silent-film star, was killed in a fire, leaving Monroe a grieving widower determined to honor his wife’s legacy. 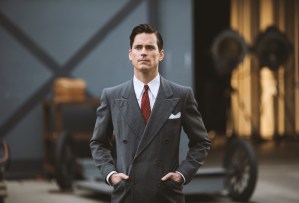 That brings us to Tycoon‘s first big problem: Monroe is too perfect. He’s a workaholic, micromanaging every aspect of his film productions, but no one seems to resent him for that. He’s set up to be the grandstanding hero who makes big speeches and has no discernable flaws — unless “He loves his dead wife too much!” is a flaw. Oh, and to lay it on even thicker, Monroe also has a congenital heart defect that could kill him at any time. (That’s why he’s so damn driven to make the perfect picture, see!)

As a behind-the-curtain chronicle of Hollywood’s lavish past, Tycoon pales in comparison to FX’s recent FEUD: Bette and Joan — which had its share of storytelling flaws, to be sure, but at least allowed its heroines to be human. And Tycoon is further hampered by stagey, hard-boiled dialogue that feels like it’s lifted from an actual 1930s movie that hasn’t aged particularly well. (Sample: “When’s the last time you were in a church?” “I do my praying at the box office, you know that!”)

If all that weren’t enough, the pilot script from film writer Billy Ray (Captain Phillips) shoves in a pair of ill-fitting subplots to add historical context. With Hitler rising to power in Europe, German diplomats are dispatched to the studio to demand that all unflattering depictions of Nazis be removed from their films — and of course, Monroe is the only executive in town who’ll stand up to them. Plus, there’s some maudlin Depression-era business about homeless families living in tents right outside the studio gates. It all feels like the perfect-hindsight wisdom of today being applied to an earlier era, rather than a grounded portrayal of that era as it was really lived. 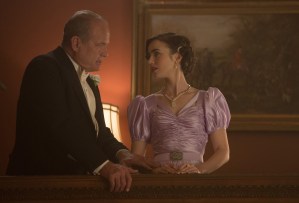 The supporting cast is admittedly solid: Kelsey Grammer as Monroe’s domineering studio head Pat Brady, who plays bad cop to Monroe’s good cop; Lily Collins as Pat’s college-student daughter Cecelia, who’s hopelessly smitten with Monroe (“I know he’s broken inside, but I can fix that” is an actual line of dialogue she says aloud) and Rosemarie DeWitt as Pat’s cagey wife Rose. That’s a lot of talent, and like Bomer, they do their very best — Collins, in particular, brings a spark of youthful enthusiasm that’s much needed here — but even they can’t salvage the thin characterizations they’re saddled with.

In the pilot alone, we’re subjected to both a blatantly foreshadowed suicide — a cheap stab at wringing some kind of emotion out of this story — and a truly groan-worthy final twist that reeks of narrative desperation. (“Please watch the next episode! Things are happening, we swear!”) And in the midst of all this flailing, Tycoon completely misses what makes the movie business so special. Hollywood was a shining beacon of hope for people suffering though the Depression, but rather than trying to convey some of that giddy, magical excitement, Tycoon wants to show us how miserable the people making that movie magic really were.

The Last Tycoon has all the glamorous trappings of old Hollywood: Amazon clearly threw lots of money at the screen, with sumptuous costumes by Mad Men designer Janie Bryant. But the joy is missing. When Monroe walks through a bustling soundstage at one point, you can feel the grand majesty of moviemaking — and what this show might’ve been. But before you know it, he walks out again and goes back to brooding. It’s all so grim and ponderous. Isn’t showbiz supposed to be fun? Or at least more fun than this?

THE TVLINE BOTTOM LINE: Don’t waste the popcorn: Amazon’s showbiz drama The Last Tycoon is a poorly plotted misfire crying out for a rewrite.