Still, the former Vampire Diaries star tells TVLine (with a laugh) that he was “very surprised” the Powers That Be would trust a newcomer to the franchise with such a critical episode, adding, “I guess they foolishly put some faith in me.”

To his credit, Wesley boasts quite a bit of experience behind the camera, having directed five episodes of his own series throughout its eight-season run on The CW. And just like his episodes of The Vampire Diaries, Wesley says his main goal here was to look underneath Clary & Co.’s supernatural drama.

Specifically referring to the scenes between Valentine and Jonathan, Wesley notes that beyond the magical circumstances of their situation — hellish torture, demonic experiments, etc. — we’re left with “just a son who feels betrayed by his father, like he’s been abandoned. It ultimately does come down to two very human characters. Yes, it’s intermixed with supernatural themes, but it all comes down to humanity.”

Wesley says it was “really pleasurable” to watch Will Tudor and Alan Van Sprang work their proverbial magic; not only are they two “really talented actors,” but the director was also thrilled to finally be shooting indoors — even within the confines of a tiny cabin — after spending several days battling the elements. And losing.

“I had a 103 degree fever while we shot all the location scenes with Dom [Sherwood] and Kat [McNamara],” he recalls. “I was physically destroyed by the flu by the time we got to the cabin, which we shot towards the end of the run, so I was just happy to be inside.” 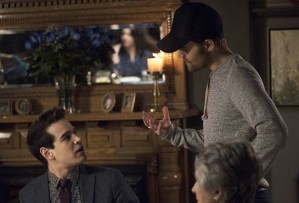 As for whether or not Wesley sees any similarities between his TVD persona and Shadowhunters‘ No. 1 bloodsucker (aka Simon Lewis), he admits he never even thought to compare the two. “I didn’t make the association with Simon being a vampire. He’s just a sweet kid with a little naiveté, hopelessly in love with a girl.” (I don’t know, that sure sounds a lot like young Stefan Salvatore to me.)

Your thoughts on Wesley dipping his toe into the Shadowhunters universe? Drop ’em in a comment below.