Suits‘ Season 7 premiere opened with the lawyer taking a drive to ask out someone — but the lucky lady wasn’t a certain redhead. (Sorry, “Darvey” fans.) Instead, Harvey took his former therapist Dr. Paula Agard (played by Christina Cole) to dinner and then smooched her at the end of the hour.

There was plenty going on in Donna’s life, too. That “more” that she spoke of wanting? Well, she found it by asking Harvey to make her a partner at the firm, which he did.

But will everyone else at Pearson Specter Litt respect Donna’s new title? And is Harvey just deluding himself with his new relationship? Read on as executive producer Aaron Korsh weighs in. 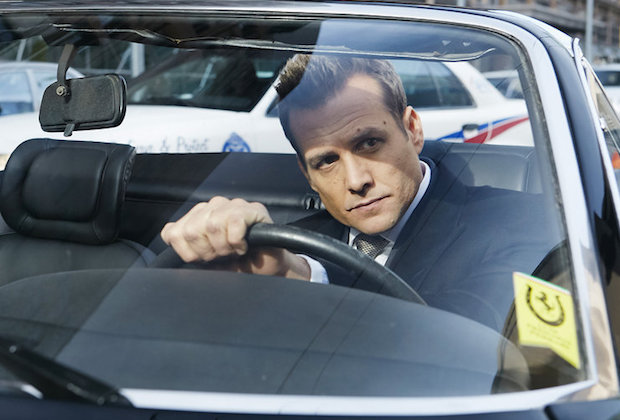 TVLINE | Every interview we’ve done for the past couple of seasons, I’ve asked you if we’re going to see Dr. Paula again. But I have to admit I never imagined her coming back into the show as a love interest.
We do have a philosophy: People come back when we feel that the time is right. Sometimes, they never come back. But oftentimes, people come back into the show in what we feel is a natural rhythm for them. But we, oftentimes, do not know in what capacity they’re going to come back as writers.

I don’t even remember how the idea was posited, but we just thought, “What the hell…! Harvey’s gotten over his mom. He’s open… Maybe that cleared up a little emotional space for a new relationship.” We felt like the fans would be expecting and wanting it to be with Donna, and obviously we understand that. I’m sure some people will feel this way, some people won’t, but maybe deep down inside, the person he should be doing this with is Donna. But for whatever reason, he had this intimate relationship with a beautiful woman that sat there and listened to his problems and helped him get over issues with his mom. Now maybe he also had that relationship with another beautiful woman that did the same thing. But in his mind, he’s associating [Paula] with positivity and support.

We were thinking about it, and we were like, “Listen, he’s just taken over the firm,” and in his brain, she pops into his head, and he’s like, “I want to do something to mark my ascendancy to Jessica’s position in taking over the firm,” and he’s asking her out. Now whether in the long run that will prove to be the right move or not remains to be seen, but that’s what’s going on, and we felt like it would give, like, a good new flavor to the season. 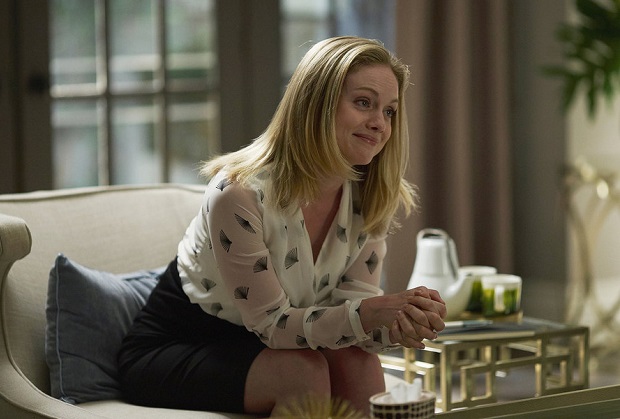 TVLINE | She is sort of the closest thing there is to being Donna without actually being Donna and without the fraught complications that a relationship with Donna would have for Harvey.
Exactly. We were very careful to say there is a mandatory waiting period, and they waited long enough so she’s not violating codified ethics or law. Having said that, my wife is a therapist, and she’s like, “It’s never encouraged to do something like this. It is not considered the best of ideas ever.” Now we can see that she’s a person and has flaws like the rest of us. Anytime you bring a character back, what we try to do is see a different side of them. There will be some other characters coming back this year where we are absolutely going to see some different sides of them as well.

TVLINE | What is the waiting period? You didn’t specifically state it in the premiere.
I don’t like specifically stating things like that because I think, in reality, the actual waiting period is too long and would not have occurred in the length of our show. So that’s why we just say it’s been long enough. First of all, I think it’s a state-by-state thing. It might be two years in California. Also, we’re sort of fuzzy on how long it’s been. We don’t really specify time too much with our characters. 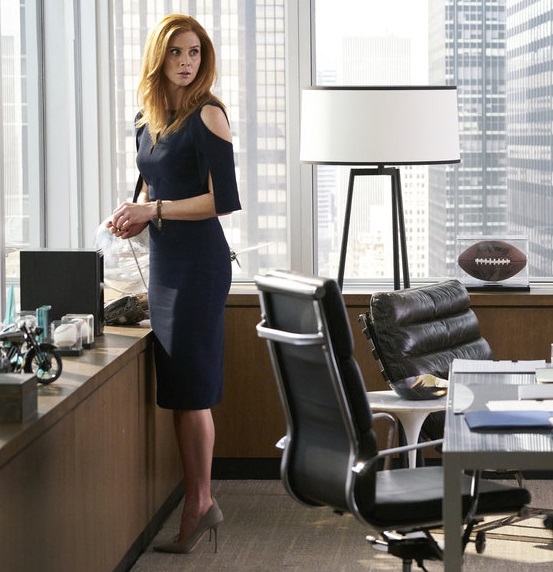 TVLINE | Donna asks for and gets partnership. This is a decision that clearly has a lot of meaning and importance for her. Is it going to be everything that she dreamed of?
First of all, I’m very proud of Donna. If I were Donna’s friend, I’d be very proud of her for stepping up and doing such a bold thing…

What we don’t talk about in this episode is she uses that money that she got [from The Donna] to leverage herself into a new position at Pearson Specter Litt. That’s part of where she gets the money from. And I think it’s impressive that Donna, in spite of being in the job that she is, has that kind of money. We’ve established over the years that Harvey pays her a lot more, but also, she got bought out by this thing.

The downside of it is that it’s a big leap to go from legal secretary to senior partner. It’s going to have consequences for Donna without a doubt. Like, imagine if you were a beat reporter and the next thing you knew, they put you in charge of running a publication. People might not respect you. They might be like, “What the hell are you doing at this position so quickly?” So there’s some of that. Also, Harvey has made this decision very early, and people might be like, “Why are you promoting her so high, so quickly?” That stuff is going to come back and have consequences in both of their lives. So in that sense, it’s not going to be everything that it’s cracked up to be. But she’s going to roll with those changes and, I think, do a really good job fighting for her position in the firm even after she’s been given this position.

Suits fans, what did you think of the season opener? Grade it via the poll below, then hit the comments to back up your pick!