There is a giant asteroid on a collision course with Earth, and Jennifer Finnigan couldn’t be more thrilled. “I’m like a major superfan of this show right now,” the actress says of CBS’ Salvation, which touches down on your TV screen this Wednesday at 9/8c.

In this new serving of summertime fare, an MIT grad student (played by Red Band Society‘s Charlie Rowe) discovers that an asteroid is set to collide with our planet in 186 days. As he allies with tech billionaire Darius Tanz (Heroes‘ Santiago Cabrera) and the U.S. government to try and stop this extinction-level event, they stumble onto the greatest conspiracy never told. Finnigan’s Grace Barrows represents Uncle Sam in this scenario, as the press secretary for the Pentagon, which comes to the table with an imperfect plan for counterattack.

Here, Finnigan shares why Salvation and its lack of earnestness was the perfect tonic after her intense Tyrant run, and reveals the lives-saving debate at the series’ core.

TVLINE | When did Salvation come along in relation to Tyrant Season 3?
Tyrant got cancelled in… [Pauses to think] I can’t remember. In my head, it was already over, I was ready to be done. I was so burnt out from those three years that I wasn’t interested in doing anything for a while. I was pretty much ready to take a year off, maybe start trying for a family. And then my agents called me about this, [CBS] had made an offer, and I just wasn’t sure. Without having read the script, and knowing just the basic premise….

TVLINE | “An asteroid is hurtling toward Earth!”
That, and knowing that it would be filming in Toronto, so that would take me away from [husband] Johnny [Silverman] yet again, for the fourth year in a row. On paper it wasn’t all that appealing, but then I read the script and I was so surprised by how much I liked it. I thought it was clever, it was smartly written, I liked the character…. I’m really grateful for that third year of Tyrant, because I’m very proud of the work I did, but the first two years I was like a prop. But [Salvation‘s Grace] was a woman who’s pretty formidable and is crucial to the fabric of the show. I thought, “This is worth a meeting for sure.” Then I met the showrunners and they were awesome, they had a laser-sharp concept of the tone of the show, the arc, the mythology, the way all the relationships are threaded together… even the aesthetic, the cinematic aspect of it. They came at me hard, and it was nice to feel wanted and appreciated.

TVLINE | I don’t think I’ve ever seen 1998’s Armageddon or Deep Impact in full, just bits and pieces now and then on cable. Had you by chance seen either of those films over the years?
Seriously, I have no interest in those types of movies! Somebody was just telling me to watch Deep Impact, but it’s not my jam. [Laughs]

TVLINE | And yet Salvation quickly rules out the solution those two had, to divert the rock with nuclear weapons.
Exactly. I’ve got to tell you, I love talking about this show. It’s my favorite show I’ve ever done, and it’s the kind of show that I would watch — which I never knew that until I started doing it. I’m a bit of an nerd, so it appeals to that side of me, with the astronomy and the science. And I think politics are unavoidable right now, and the climate is pretty damn shaky, so we touch on that without beating people on the head about it. The show is not earnest. There are beautiful love stories and complex relationships throughout, because at the end of the day, even if there was an asteroid about to hit the Earth and you were privy to that information, you still have a life. You’re not going to drop everything and focus completely on eradicating an asteroid. Life goes on, still, and these characters haven’t forgotten that.

TVLINE | The edge you have over, say, Armageddon, is that they only had 18 days to solve this, where you’ve got six months. Over a season, you can play out these longer beats and get into the how and the why and the interpersonal drama. And also have the time to build and try the new tech you need…
That’s a really good point; [186 days is] just urgent enough. It’s not happening overnight, so you’re not constantly experiencing a sense of urgency, which as an actor would be exhausting, but would also be exhausting for the audience too, where every minute is crucial or life-or-death. Because it’s 186 days, it allows it to breathe. 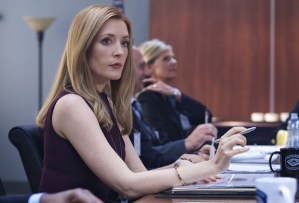 can have that moment to realize that if her daughter is deferring college a few months to travel, that’s half of their time left together, possibly. So she’s going to have a reaction.
Exactly. I also think that at times certain characters in shows like this can become very earnest — “We have to save the world!” Now granted, I’ve said that a few times in the run of this show, but I try to ground it as much as a I can. [Laughs] The creators don’t want earnestness, they just want real, so they infuse the show with levity here and there, there’s a little light comedy, it’s sweet, there are romantic moments…. There are some pretty genius political parallels they’ve come up with. The scripts are like crack. Like, every time a script comes out the crew and cast are scrambling to get their hands on it. If you like the pilot, I promise you — it just gets better. [Editor’s note: It does.] I’m such a nerd about this show, I can’t even!

TVLINE | Grace starts off as the dutiful press secretary. How will her responsibilities change over the course of the season?
In a massive way. The official job title remains, but she gets let into the biggest secret that the  government has ever kept, so it’s a huge deal. And it’s a massive burden that shes carrying, especially being a mom. That’s what really rattles her, realizing that it’s not good enough to just try to stick to whatever the government’s plan is. She has a responsibility to her daughter, and essentially to the world, to do more.

TVLINE | Who are the “bad guys” in this? Obviously no one wants an asteroid to destroy Earth.
There are just so many different layers every episode, different factions that sort of arise. They’re building a really complex mythology, so I would say that the Russians play a part; there are dark forces in our government; there are independent underground forces trying to get in there as well…. It’s pretty complex, and it’s just fun. It’s a fun watch.

TVLINE | Grace seems to have genuine feelings for Harris (the Deputy Secretary of Defense, played by Hawaii Five-0‘s Ian Anthony Dale). What will her time spent with Darius rouse in her?
There’s a really big moral question that arises early on, where you have the chance to save the entire world or possibly no one, or save not even the half the world for certain. What do you choose? I love that debate, and it creates a rift between Grace and Harris, while her and Darius’ 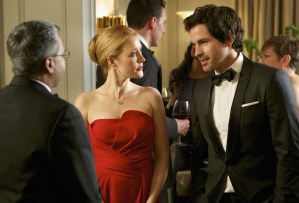 priorities and are more aligned, surprisingly. She’s always been a rule follower, and all of the sudden here comes this very charismatic guy who wants to save the planet, on his own terms….

TVLINE | And he has great hair.
Hes got really good hair. There’s a lot of good hair on this show. I always joke that you know it’s a female showrunner when two extraordinarily attractive men are fighting over the affection of a pregnant woman in her 30s. [Laughs] [Finnigan was pregnant during part of filming, with her and Silverman’s first child.]

TVLINE | Lastly, did playing a press secretary give you any sympathy for what Sean Spicer and Sarah Huckabee are out there doing on a daily basis?
I’ve got no sympathy for any of them. [Laughs] I’ve seen what their job is like, but I’ve also seen it done way better than that. We’ve never had so much attention put on a press secretary before, so obviously you’re doing something wrong! No, as Grace I wanted to take a far different approach. This character has actual respect for the press room to which she’s speaking, she’s warm, she makes them laugh, she is liked…. I took Sean Spicer and did the opposite!