Twilight‘s Jackson Rathbone seems poised to drive a stake into Tom Chandler’s civilian bliss when he joins TNT’s The Last Ship, as seen in these first photos from the coming season.

Arriving Sunday, Aug. 20 at 9/8c (with a two-hour premiere), The Last Ship Season 4 reveals that Tom Chandler (played by Eric Dane), having given up his heroic titles and responsibilities, sought solace — and anonymity — with his family in a small fishing village in Greece. Meanwhile, Captain Slattery (Adam Baldwin) and the crew of Nathan James have discovered that the Red Flu virus “jumped kingdoms” and now infects the world’s food crops, bringing humanity to the brink of global famine. As the ship traverses the Mediterranean in search of a solution that can save the world’s food supply, Chandler encounters his own enemies in Greece, his “hero’s journey” evolving into a modern-day retelling of Homer’s Odyssey.

Likely among Chandler’s adversaries: Rathbone (photo’d above and below) will recur as Giorgio, a rich Greek-American who is equal parts playboy and dangerous thug, and as such uses his considerable wealth and power to “make the Mediterranean his playground.” Rathbone’s previous TV credits include Finding Carter, Aim High and Beautiful People. 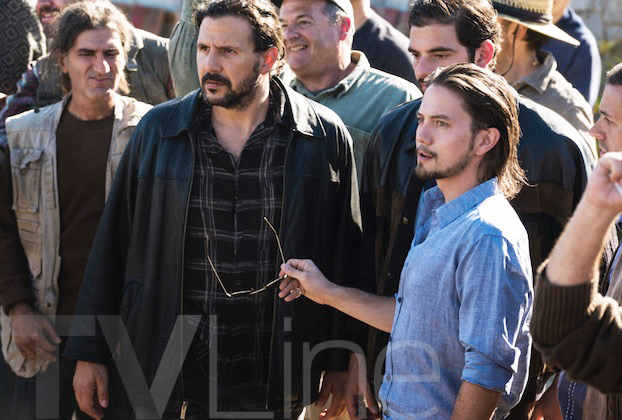 Want more scoop on The Last Ship, or for any other show? Email InsideLine@tvline.com and your question may be answered via Matt’s Inside Line.