There’s an intriguing, vibrant story at the heart of FX’s new drama Snowfall. Unfortunately, there are also two other, less interesting stories that come along with it — and the show ends up OD’ing on an excess of ambition.

Snowfall, debuting this Wednesday at 10/9c, comes from co-creator/executive producer John Singleton, who immortalized the streets of South Central L.A. with his iconic ’90s film Boyz N the Hood. Here, he takes us to his old stomping ground a decade earlier, in the summer of 1983, when small-time weed dealer Franklin (Damson Idris) gets his first tantalizing taste of the cocaine trade. What Franklin and his friends don’t know, though, is that crack cocaine is about to hit their streets… and change those streets forever.

The visual style of Snowfall immediately commands your attention: Every frame is saturated with color, with lots of lens flare, swooping camera moves and quick cuts. (Plus, the show is set to a throbbing soundtrack of ’80s proto hip-hop classics.) Directors Adil El Arbi and Bilall Fallah — a pair of Belgian filmmakers making a big leap to Hollywood here — helm the first two episodes and set a bold, inventive template for future episodes to follow. Even when the storytelling stumbles (and we’ll get to that in a minute), Snowfall is still a dazzling feast for the eyes. 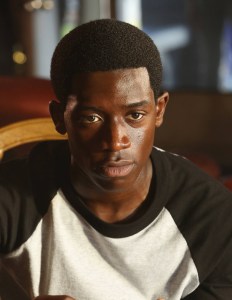 Franklin’s story is a familiar one — a smart, resourceful kid discovers that crime does pay — but Singleton and co-creators Eric Amadio and Dave Andron (Justified) find a way to make it fresh. Idris, a British newcomer, is magnetic as Franklin, and Michael Hyatt (Crazy Ex-Girlfriend) brings real warmth as Franklin’s hard-working mom Cissy. Franklin’s world is full of vividly drawn characters: his weed-slinging Uncle Jerome (Amin Joseph), who doesn’t want to mess around with coke; his hothead friend Leon (Isaiah John); his loose-cannon Israeli drug supplier Avi Drexler (Alon Moni Aboutboul), who enjoys shooting henchmen in the chest to test his bulletproof vests and rolling a bowling ball into rows of Champagne bottles… it’s all more than enough plot for one show to explore.

But Snowfall, unwisely, doesn’t just stop there. It tries to weave in two more stories on top of Franklin’s: a Mexican wrestler named Gustavo (Sergio Peris-Mencheta) who gets hired to be the muscle for a powerful crime family, and a CIA operative named Teddy (Carter Hudson) who strikes up a partnership with a Nicaraguan soldier. Neither story works as well as Franklin’s does; the CIA subplot, in particular, is drab and impenetrably dense, and not interesting enough for us to try to untangle. (The wrestler story at least has Breaking Bad alum Emily Rios, who’s very good as the crime lord’s no-nonsense daughter Lucia.) 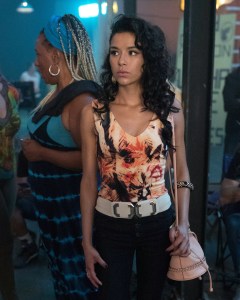 The result is a show that’s far too scattered, and never builds any narrative momentum because it’s always cutting away to another plotline. It’s frustrating to get invested in Franklin’s story, only to shift focus to Gustavo or Teddy just when things are heating up. Singleton and his fellow writers seem to be going for a kaleidoscopic, Traffic-like saga about the advent of crack in America, but to pull that off successfully, all parts of the story need to be equally compelling, and here, they’re just not. Franklin’s story might someday intersect with Gustavo and Teddy’s in meaningful ways… but who wants to stick around long enough to find out?

Also, a word of warning to squeamish viewers: Snowfall vigorously pushes the boundaries of basic cable, with graphic depictions of violence, nudity and rape. And that, on top of the aforementioned visual flair, can make the show almost overwhelming to watch. Even Franklin’s adventures in the crime world feel a little too reminiscent of a shoot-’em-up video game like Grand Theft Auto, like he has to complete a series of missions before leveling up to Apprentice Coke Dealer. When the show leans on flashy style and shock value, we sometimes lose touch with the characters’ emotions and motivations, even Franklin’s.

Still, Franklin’s heart-pounding tale of ambition, powered by Idris’ performance, is nearly good enough on its own to make Snowfall worth watching. And I appreciate the refreshing jolt of new blood, with its rookie directors and cast of mostly unknown actors, that Snowfall brings to the TV scene. But the Gustavo and Teddy storylines muddy the narrative waters too much to justify a recommendation, even in these lean summer months. Like a greedy drug dealer, they cut their pure product with too much filler… and we’re ready to buy elsewhere.

THE TVLINE BOTTOM LINE: FX’s drug drama Snowfall boasts bold visuals and one compelling storyline, but the other subplots fall too flat to recommend it.