Man, are the grave diggers at the Otto ranch ever gonna be exhausted. Sunday’s Fear the Walking Dead bumped off not a character or two but an entire family. And possibly even more disturbing, the cause of death was neither walkers nor Walker and his land-reclaiming tribe — and Madison ably lied about the massacre to further her own agenda. What did in the Trembol clan, and how did Nick and Alicia’s mother hope to turn the bloody mess to her advantage? Read on…

‘IF WE STAY, WE DIE’ | As “Red Dirt” began, Nick, still palling around with Jeremiah, and Alicia, more than “palling around” with Jake, were concerned that Madison had yet to return from the expedition — especially since Troy was leading it. But he’d promised to keep her safe, Jake reminded his new girlfriend. And “you can trust him… on this at least.” When finally the group hobbled back to the ranch on bloody, shoeless feet, Vernon refused to let Jeremiah speak privately with Troy, allowing a freaked-out Mike to announce that Indians had slaughtered Phil and everyone at the outpost, and they’d all be next unless they vamoosed. Behind closed doors, Troy argued for striking back against Walker, Jake argued for negotiating with the Native American — he was a lawyer, not a psycho — and Madison, as she now did on the regular, stuck up for Troy. After rolling his eyes at Maddie’s “liberal judgment” of his racist P.O.V., Jeremiah poo-pooed the threat that she suggested Walker represented. “All civilizations,” he insisted, “are born from violence.” Or at least they all die from it.

Upon learning from Jake that Jeremiah wasn’t dealing very well with the loss of yet another founding father, Alicia asked who’d take over when he, too, was gone, making it clear that she felt her beau was the only sane — no, make that the only, never mind sane — option. Meanwhile, Gretchen admitted to Madison that Verne wanted to pack up Mike and their whole family and run. “I’ve never seen him scared, even when the dead rose,” the teen added. But he sure was now. That night, Jeremiah was busy playing the classic Sue Ellen-on-Dallas scene, eyeballing a bottle of booze like it was a favorite ex-lover, when small fires broke out all around the perimeter of the ranch — a mere warning from Walker, the Otto patriarch argued, because “they don’t have the arms or the balls” to storm the property. Regardless, people were spooked, Madison warned. And right on cue, Vernon informed his old friend that he and his family were taking off. Give them a reason to stay, to fight, Maddie pleaded. But Jeremiah refused. “Some men, they have kids,” he groused, and it “turns ’em into women.” 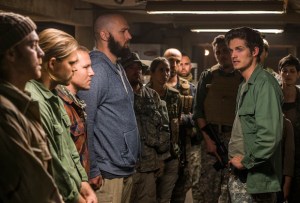 ‘ANYONE WHO LEAVES IS DEAD TO ME’ | Just as the Trembols were pulling out of the ranch, Troy’s anger over being abandoned by old buddy Mike reached its boiling point, prompting him to stop their RV and rage about the supplies they were taking. When first Jake and then Jeremiah intervened, fists, as you’d expect, flew. After the dust had settled, Madison checked on Troy, who confessed that Mike had been the one friend who’d never quit on him. Well, until then. The Trembols, Maddie suggested, had just needed to see for themselves the state of the world beyond the ranch. But if he was willing to step up, she’d help him save everyone else from repeating the Trembols’ mistake and leaving. Message received, that night, he gave the militia an honest-to-God good, sane pep talk. “From now on,” he said as Maddie looked on, proud as a mother, “we set an example” of order and discipline, and make the ranch’s residents more than feel safe.

At the same time, Nick discovered Jeremiah trying to drown his upset over Verne’s departure in booze. Before he passed out, he’d shot the table at which the founding fathers had plotted their movement and done some slurring about how there was blood in that home, in the earth, in the… zzz. Later, Maddie caught Alicia sneaking in from Jake’s. And while Mom was relieved to hear that there was birth control in the pantry, she was disconcerted to get the impression that her daughter was sleeping with Jake not just because she liked him — which she did — but because he was important to them. The following morning, Nick was pretending for Jeremiah’s sake that he hadn’t even been there to witness his tumble off the wagon when they noticed one of the Trembols’ horses at the fence. Translation: The Trembols are dead, Papa Otto subsequently told Maddie. The only question was how. 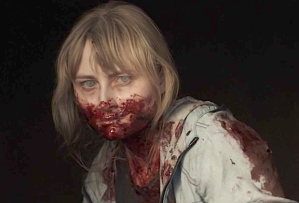 ‘GOOD PEOPLE DIE EASY AS BAD’ | While Jeremiah, Madison and Nick set off in search of the Trembols’ remains, Alicia found Jake planning to take a back route to Walker’s camp (so as not to be intercepted by Troy) in hopes of working out an agreement. When she’d pushed for him to assume leadership, she insisted, she hadn’t meant for him to embark on a suicide mission! Though she went so far as to ask him not to go, off he went. Shortly, Jeremiah, Maddie and Nick found the Trembols’ camper, its windshield riddled with bullet holes, the family, dead and turned. (Worst of all, sweet Gretchen was among the zombies eating the clan’s other horse alive.) Jeremiah assumed that this wasn’t Walker’s handiwork but Troy’s. Madison disagreed… but, as Nick pointed out, Walker — a nemesis who’d gone so far as to take her boots! — wouldn’t have left behind a week’s worth of supplies, a horse and an RV!

When the trio returned to the ranch, Madison revealed to the looky-loos the bodies of their dead friends and, while the crowd was in that heightened emotional state, gave a shrewdly rousing speech. The people responsible, she said as Nick threw major side-eye her way, had also killed Phil and everyone at the outpost, had killed Travis, and were trying to scare them into leaving so they could be picked off one family at a time. Not realizing it was a tall tale, Alicia snuck off after Jake, hoping to save him from certain death at Walker’s hand. Later, Nick asked his mom point blank, “How do you tell a lie that big and sleep at night?” Not that he didn’t understand why she’d done it, he’d just have appreciated a heads-up. And while protecting Troy, Nick added, “just don’t forget what he is.”

‘YOU’RE THE HEIR’ | It didn’t seem like Madison had forgotten, however; she just seemed more focused on what he could be. When she approached him in the wake of her speech, he swore he hadn’t set out to kill the Trembols, he’d merely wanted Mike to look him in the eye and say he was leaving the way Vernon had Jeremiah. It hadn’t gone down that way, and well… she (and we) knew the rest. Jake doesn’t have what Troy does, Maddie told her surrogate son. So him losing control, “that can’t happen… There’s a fight coming, and you have to save us. Can you?” she asked. “Yes, ma’am,” he replied, concluding another chapter of what is fast-becoming the most twisted story the show has ever told.

So, what did you think of “Red Dirt”? Was I the only one who was sorrier than they expected to be that Gretchen was killed? She kinda cracked me up. Anyway, hit the comments.