How do you even begin to wrap up seven years of twists, secrets and mysteries? If you’re Pretty Little Liars showrunner Marlene King, you give it your all and hope for the best — knowing full well that you can’t please everybody.

“I had to stay off social media [after the finale], because people who don’t like things are always more vocal than people who do,” King tells TVLine. “We did our best, and you can see how much care, attention, love and hard work was put into that episode — not just from me, but from the actors and the crew. Everybody worked their butts off, and it was a labor of love. Hopefully people will jus take a breath and absorb it over time. Maybe even watch it again!”

Below, King answers all of TVLine’s burning questions about the show’s final two hours, including how Wren died, why Aria can’t have children and, of course, how the moms really escaped that basement.

TVLINE | I know it’s a bummer that the show is over, but it must also feel like a huge weight has been lifted.
As I tweeted yesterday, it’s like happy/sad. It’s such a weird feeling of mixed emotions, but “relief” is probably the biggest word of all. All that mythology was taking up so much space in my brain, and I can now release it.

TVLINE | But not before making that little cameo at the end!
[Laughs] I still don’t know how I feel about that. I didn’t write it for me, but someone in a prep meeting suggested I do it. After a couple days of saying no, I changed my mind and thought, “It’ll be fun.”

TVLINE | Before we get into the heavy stuff, I love that the finale revisited the moms’ escape from the basement. Is there a definitive answer to how they got out?
There’s really not. Each one of them has their own theory, which are so good. I feel like some great fan fiction could be written about how they got out. … I loved the line about how Pam didn’t drink for a year after that. Whatever happened, it was messy.

TVLINE | Shifting gears, I’m glad we found out who fathered Alison and Emily’s twins, but are they ever going to find out?
I think they have found out. In my mind, they have. Somehow that information got to them. Spencer knows it, so you have to figure that Spencer told them.

TVLINE | I don’t suppose you heard the theory that Charlotte was the father. It was so insane, I kind of loved it.
[Laughs] No, I did not hear that theory. … We’ll send that one to Strawberry Patch Lane, which is our fictitious show where we felt like things that jumped the shark went. 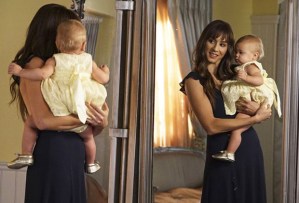 TVLINE | Was there any significance to naming the twins Lily and Grace?
No, we just wanted pretty, sweet names. Girly names, for some reason. … No big reveals in those names, they were just names we liked.

TVLINE | And for a finale full of babies and pregnancy, why did you make it so that Aria was unable to conceive?
We needed a reason for her to have conflict in the episode. She needed to feel like she couldn’t marry Ezra, but not so bad that he would actually leave her at the altar. It was enough of a secret to make her doubt that he might not show up.

TVLINE | For being in their early-to-mid twenties, these girls really do have baby fever. If I was them, I wouldn’t want to bring any more children into this insane world.
Yeah, they all want to have their babies. … Maybe they just want one good thing.

TVLINE | Going back to Wren, this might sound morbid, but do we know how he was killed?
We were going to kill him on screen, but then we lost [Julian Morris], who was only available to us for one day. We didn’t in our minds say how she killed him, but I don’t think it was something he appreciated, and I think it was a surprise. She couldn’t stand the thought of him knowing she was Alex not accepting her as Spencer. In her mind, she really wanted to be Spencer. She was warped enough to say, “Well, I’ll jus turn him into a diamond so he’ll always be with me — and I’ll be Spencer!”

TVLINE | A win-win!
Yes, a win-win for Alex Drake!

TVLINE | I was surprised by how heartbreaking Alex’s backstory turned out to be, since we’ve always treated A.D. as this emotionless villain.
We’ve tried to do that with each “A,” to give them a deep-rooted sadness and a need to belong and be a part of something. That can fuel so much.

TVLINE | I noticed that Alex wasn’t wearing the Wren necklace in the final scene. What became of it?
No, but knowing Mona, she’s got it somewhere. She’s holding onto that.

TVLINE | Wren’s final resting place is in Mona’s jewelry box.
Yeah, could be! You’re very detail oriented, Andy. That didn’t even occur to me until right now.

TVLINE | Trust me, I’ve never combed over a series finale this closely before.
Well, that’s good. OK, we’ll say it right now — Mona’s got it. 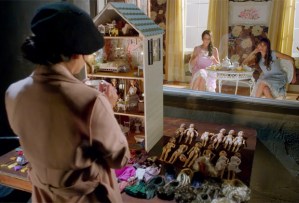 TVLINE | How long can Mona really expect to keep Alex and Mary Drake in her dollhouse?
[Laughs] Not forever. We may hear more of that story in the future, fingers crossed.

TVLINE | I’m surprised Alex lived, to be honest. Was there talk of possibly killing her off?
Oh, yes. All of the writers were pitching what they thought that ending should be, and a lot of people thought Spencer should find Alex and kill her. We talked about a Silence of the Lambs ending where Alex gets away, then calls Spencer, and Spencer walks up behind her and shoots her. But I felt like for Mona to win the game and for the girls to live happily ever after was perfect.

TVLINE | I have to say, I think her finest achievement was that crazy underground recreation of Spencer’s house and yard.
That was pretty cool. I saw online these amazing underground bunkers, like there’s one of Las Vegas. And you can buy these underground bunker kits and build them under your house, which is crazy. So it’s possible!

TVLINE | If the finale had been three hours instead of two, what would you have included?
Probably a little time before the one-year time jump. It would have been nice to see more from that. I could have gone on for a couple more episodes, but it ended where it should have ended, absolutely.

OK, you tell us: How do you feel about the series finale after reading King’s explanations? Grade the episode below, then drop a comment with your full review (along with any questions you still want answered.)