Here’s the simple recap of Twin Peaks Part 8: Colors! Lights! Sounds! What am I watching?

Now for the longer version, let’s take a careful look at the truly wild (but deceptively simple) phantasmagoria that exploded gorgeously across the world’s television screens on Sunday night:

IN SOUTH DAKOTA | We started off in a very normal way (considering what was to come). Bad Coop and Ray have escaped prison, and are driving towards a place called “The Farm” (is it Big Ed’s Gas Farm? Doubtful). Bad Coop still wants that mysterious and vital information from Ray. But Ray seems to have colluded with the prison warden and stuck Bad Coop with a faulty gun. Out in the countryside where they have stopped, Ray shoots Bad Coop, who falls down “dead.” And that’s where things start to get bizarre…

A group of spirits materialize from thin air and surround the body of Evil Coop. These spirits are multiples of the “Charred Man” who appeared in (and floated out of) Matthew Lillard’s jail cell back in Part 2, and the hospital corridor in Part 7. These Charred Men dance around Evil Coop, wiping his blood all over his body. And a dark sphere that seems to contain the spirit of Killer BOB seems to rise from Evil Coop’s chest (is BOB escaping?). Suddenly, we jump to the Road House in Twin Peaks proper, where Nine Inch Nails are playing (an homage to Laura?) “She’s Gone Away.” (For a small town in the middle of nowhere, the Road House is booking some pretty killer acts.) The NIN music video finally ends, and we jump back to bloody Evil Coop, who suddenly sits up and pops his eyes open. Not dead after all. It would seem the Charred Men (or Trent Reznor) brought him back to life. But is he now BOB free?

From here on out, I’m just going to tell you what I saw and what I think it means. But keep in mind, 80 percent of this is scattershot theorizing, as Part 8 will be likely be discussed and dissected for the rest of time.

IN NEW MEXICO IN 1945 | We see the first ever nuclear bomb detonation out in the deserts of White Sands. We go inside the mushroom cloud. David Lynch channels Stanley Kubrick and takes us on a wild ride through… splitting atoms and disturbances in the fabric of time and space? If you have seen the end of 2001: A Space Odyssey, it was a lot like that. Somewhere inside the cosmos/mushroom cloud, we see what appears to be a white, faceless woman floating in nothingness. Is she “The Experiment” in the credits? Is she the same all-white killer “Being” from the glass box back in New York City? Does she have little horns or flaps on her head that make her resemble the shape on Evil Coop’s playing card? (I think so, yes). Is she who Evil Coop is looking for? We watch this white Being give birth (from her mouth) to a long cloud-like worm. BOB’s face appears in a dark sphere of that goo. My interpretation: the nuclear bomb has unleashed untold horrors upon the world. And evil beings or spirits from another dimension (perhaps they are aliens?) have found a passage to our reality through the hole made by the bomb. BOB is the evil ambassador from “another place” and now he is here. 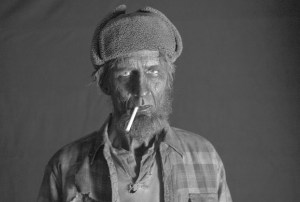 Charred Men are multiplying and taking over a small town. They are congregating in and around a burning convenience store. It is very, very important to remember that the One Armed Man in Season 1 and Phillip Jeffries in Fire Walk With Me both told us that BOB and his cronies meet and/or live “above a convenience store.” We even saw one of their scary gatherings up there in Fire Walk With Me. At that meeting, two (seeming) lumberjacks stood guard (Twin Peaks Geeks have long theorized that one of them is the Log Lady’s deceased husband, but now I don’t know). And those two lumberjacks look very, very similar to the Charred Men. Those lumberjacks were both credited as “Woodsman.” And now in Part 8, the seeming leader of the Charred Men (an actual, honest to goodness, professional Abraham Lincoln lookalike in real life) is also credited as “Woodsman.” It is not a coincidence. They are “one and the same.”

IN THE PURPLE CASTLE | I’m guessing that the beautiful tower on top of the island cliff in the all purple world is actually the oft-mentioned White Lodge. It is presumed that BOB and all his evil buddies come from the Black Lodge (possibly represented by the Red Room), whereas the White Lodge is inhabited by the Giant. And now also by his (new to us) lady friend Senorita Dido. It is very important to note that this entire season began back in this same location. The first thing we ever saw in Season 3 was the Giant talking to Good Coop in this same black and white room. And when Good Coop fell out of the glass box, he landed on this same purple island. Which seems to mean that the “Maybe Asian Lady With Her Eyes Possibly Sewn Shut” and Ronette Pulaski as “American Girl” also both likely reside somewhere in this castle (or did at one time).

The Giant seems to be alerted (by the “Huge Black Bell Shape” from Part 3) that something is amiss in the universe. He is summoned to a lush old fashioned movie theater (Club Silencio, anyone?) where he sees the birth of the bomb, and of BOB. His response? He floats up to the ceiling and produces a golden orb (just like the one the real Dougie turned into). It seems to contain the spirit of Laura Palmer. Possible interpretation? The Giant is a force for good, and he is attempting to restore balance to the cosmos by allowing Senorita Dido and a large golden horn to send the Good Golden Laura Orb down to earth.

BACK IN NEW MEXICO, NOW IN 1956 | The new Woodsman (the Abraham Lincoln lookalike) stalks around a small New Mexico town, asking for “a light” (for his cigarette). He takes over a radio station, kills the receptionist and the DJ, and repeatedly broadcasts an eerie freestyle poem about water, horses and darkness (this was genuinely terrifying). This poem seems to hypnotize anyone listening to the broadcast (including a 1950’s homage to Norma) and they all pass out. A young girl (who was out on an innocent date earlier in the evening, during which she found a lucky penny bearing the image of none other than Abraham Lincoln) hears the broadcast and tries to turn off the radio, but seems to fall deep asleep instead. And then a strange bug or alien creature (stay with me) that hatched somewhere out in the desert flies up to her window and crawls into her open mouth and down her throat. Possible interpretation: Maybe this bug is delivering the power-for-good “Golden Laura Orb” into the world and into this girl. Who knows, maybe this girl is Sarah Palmer, Laura’s mom. (I didn’t see any real connection between the bug and the Laura Orb, I’m just telling you what my gut says).

BONUS POINTS | Although what we saw Sunday night was experimental, confusing, gorgeous and bizarre, I am taking away a simple idea: back when the bomb went off, two forces entered the world from other dimensions. A force for good, and a force for evil. They will wage battles and use humans as playthings. They look like us, they inhabit us, they destroy us, they save us. Mark Frost’s recent book The Secret History Of Twin Peaks has a very long section about Mayor Milford’s brother (curiously, also named Dougie) who may have played a part in the development of the bomb and the discovery of aliens in Roswell. In my very, very humble opinion, what we saw tonight was David Lynch taking Mark Frost’s well thought out mythology of BOB and the nature of evil and the Lodges, and shredding it up into a big artsy collage. You will remember that Lynch all but tore up the script to the series finale, and rebuilt it using the same ideas and structure, but with all new and bizarre materials. Part 8 was a crazy episode, likely as shocking to today’s audience as the series finale was to the audience back in 1991. But like much of Lynch’s work, it had its own logic, narrative, and rules. I wouldn’t count on getting any explanations in upcoming episodes about what actually went down in Part 8. Maybe just give yourself a break, take a day or two off, lie down, go to the beach, think about what you saw. You’ve got two whole weeks to recover before Part 9.