For its third night of Season 14 auditions, So You Think You Can Dance traveled to New York City — and, amazingly, didn’t play Jay-Z’s “Empire State of Mind” over a single inspirational montage! (But there’s still another night of NYC tryouts awaiting us, so perhaps I’m speaking too soon.)

After showcasing a bevy of stunning auditions in Los Angeles, the Fox series’ pit stop in New York proved equally as successful, featuring at least two Dance hopefuls that, at first blush, seemed worthy of a spot in the finale.

Not earning his ticket to The Academy, meanwhile, was Darius “The Bigger Cheese” Reed, whose kooky, confounding audition was not long for the So You Think You Can Dance world — but, with some fine-tuning, would probably pass muster in a RuPaul’s Drag Race lip sync, no?

But I digress. Below, my rankings of the six Academy-bound contestants:

6. Joseph “Klassic” Carella and Huwer “Havoc” Marche Jr. (Flexing) — Thus far, the theme of Season 14 has been, “Wait, they didn’t send that person to choreography first?!” Case in point: Klassic and Havoc, who — despite bringing a real artistry to their hip-hop niche — didn’t showcase their ability to handle more rigid choreography or traditional partner work. That said, the duo did deliver one of the evening’s most entertaining pieces, which can go a long way when trying to win over Nigel & Co.

5. Ryan Bailey (Contemporary) — Much like Anastasiia and Viktoriia’s modern dance from the Season 14 premiere, I didn’t quite understand Ryan’s contemporary-adjacent performance — and yet, I was captivated by it all the same. (That turning jump with an ankle grab? Flawless.) But while I admire Ryan’s commitment to his left-of-center style, I also worry that his eccentric vibe will hold him back at The Academy, where he’ll need to master multiple dance styles — and quickly. 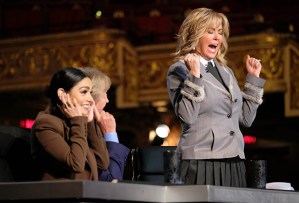 4. Ana Sanchez (Colombian Salsa) — Make no mistake: Ana’s footwork during her salsa was both dizzying and dazzling, and her fearlessness with those tricky lifts was remarkable. But, unlike the judges, I got the sense that Ana’s sassiness on stage was meticulously rehearsed; rather than enjoying the 90-second ride, it seemed Ana had practiced every hint of attitude in her routine, right down to the “Woo!” she let out after a particularly impressive combination. There’s no doubt she’s an incredible dancer, but you could practically see the wheels in Ana’s head turning as she performed, which detracted from an otherwise sublime audition.

3. Chaz Wolcott (Tap) — Might we have found a tap dancer to follow in Gaby Diaz’s season-winning footsteps? Given the ease and joy with which Chaz delivered his audition, it’s very possible. Coming off back-to-back tours with Cats and Newsies, Chaz may end up veering into Overly Theatrical Territory when he reaches The Academy. But for now, let’s revel in Chaz’s ability to tap across the Dance stage as if he were floating across a tranquil pool.

2. Koine Iwasaki (Contemporary) — As Nigel Lythgoe astutely observed in a previous season, contemporary routines on SYTYCD are often about “reaching and emotion, and it means nothing.” Although Koine’s movements were precise and elegant on their own, her performance was elevated so much by her emotional connection to the piece. The anguished expression on her face, the way her body curled into itself for that final pose — every motion seemed to communicate a different feeling, allowing Koine to take us on a simply breathtaking journey.

1. Kaylee “Impavido” Millis (Jazz) — In the event that Impavido doesn’t go the distance in Season 14, I can only hope she gets a chance to work with Sonya Tayeh before getting the boot. (A match made in heaven, yes?) Seamlessly melding jazz with contemporary and hip-hop, Impavido was alternately vulnerable and powerful, demure and confident, graceful and awkward. Despite getting saddled with New York’s first audition slot, Impavido proved impossible to look away from, and impossible to forget.

With that, I hand it over to you. Did any of Dance‘s New York auditions knock your socks off? Hit the comments below with all of your thoughts on Monday’s episode.