Before moving to its new Mondays-at-9 time slot on June 26, AMC’s Preacher kicked off Season 2 Sunday with an hour that was every bit as sexy, wacky and gory as a fan could pray for. (If nothing else, it had to make at least a few of us rethink our definition of “foreplay.”) But did “On the Road” bring Jesse, Tulip and Cassidy closer to their quarry — God — than it did the Saint of Killers to his — Jesse? Read on; the recap below is your own personal Book of Revelations. 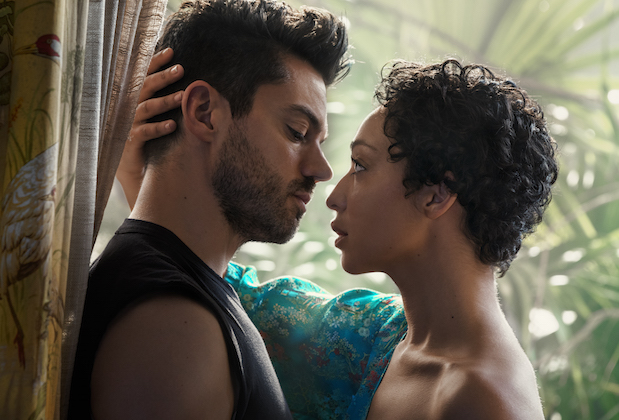 ‘THEY DO NOT PUT FORESKINS IN FACE CREAMS!’ | As the three amigos began their scavenger hunt to find God — first stop: the home of one Mike, an old Custer family friend and, ahem, “religious scholar” — they were in exceptionally high spirits, chattering on about circumcisions and Dexys Midnight Runners and, you know, the usual stuff. When Tulip got nailed by a state trooper for going 97 mph, rather than do her “Afghan-war-vet thing” to get out of the ticket, she led the cops on a wild chase to… well, nowhere fast. (As she’d be the first to point out, though, it sure was fun.) Once they were apprehended, despite Tulip’s objection to Jesse’s use of his “smoky brain hand” superpower, he still unleashed Genesis, ordering a deputy to recite “The Yellow Rose of Texas” while the chief maced his own balls. He probably could — and would — have gone on for an hour making mischief, but almost as quickly as he started, shots rang out, and guts went flying: They’d been found by the Cowboy, aka the Saint of Killers! 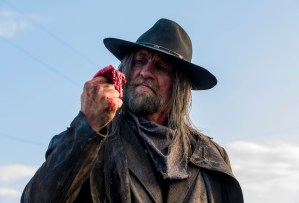 ‘UNLUCKY START IS ALL’ | After the road-trippers escaped by the skin of their teeth, they made a pit stop to refuel and give Tulip a chance to get out of her mouth the taste of the intestines she’d had to use to siphon gas to make their getaway. (Unfortunately, this also gave Cassidy a chance to heal his wound by eating a cat — enough with that s— already. Feed him another Miles when need be!) Unaware of the Saint’s murderous mission, Jesse nonetheless speculated that they’d been attacked because of Genesis. More likely, Tulip retorted, the reason was location, location, location. “We’re in Texas,” she noted. “They pretty much grow dumb-ass crazy here.” After the trio took off again, the convenience store’s proprietor, while shaking in his boots, lied to the Saint that no, the preacher hadn’t been there. In response, the Saint tore out his tongue by hand. (At least no one could say that he didn’t give his savagery the personal touch.)

‘DO I NEED TO CALL YOUR PARENTS?’ | Upon arriving at his old pal’s, Jesse had Tulip and Cassidy wait in the car in the garage, because “Mike can be… ” And the fact that he never finished that sentence pretty much said it all. While alone with Tulip, Cassidy couldn’t help but be enchanted, even as his crush flicked viscera out of her hair. He also couldn’t help but feel guilty that they were keeping their tryst a secret from Jesse. When the vampire suggested confessing, she snapped that, “out of all the stupid things you ever said, that’s the stupidest,” and added that the “deep-down side” of Jesse would not react well to the news. Speaking of Jesse, if not his “deep-down side,” he came back out to the garage with Mike just as Tulip and Cassidy discovered in the corner a girl locked in a covered cage. Come on in, said Mike as if they’d merely stumbled upon his hibachi. “You don’t hear her as much inside.” 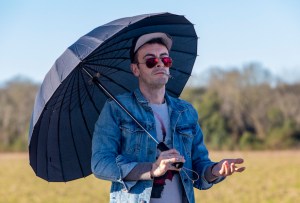 ‘ARE YOU KIDS HIGH RIGHT NOW?’ | Resentful as he was at having to explain why he appeared to have a hostage, Mike — not only a preacher but the one who’d married Jesse’s folks — told Tulip and Cassidy that the covered cage helped parishioners curb their urges. (Interestingly, at the mention of Jesse’s mother’s side of the family, the treasure chest in the fish tank in the room ominously opened. Were they pirates? Mermaids? Tetras? It’s hard to rule anything out with this zany show.) Finally, Jesse revealed the reason that they’d come: God’s gone AWOL, and they hoped Mike could steer them in the direction of His likely destination. Short answer: no. But they could spend the night — in one bed, with Jesse awkwardly sandwiched between the BFF and true love that he didn’t realize knew each other in the Biblical sense.

‘I DON’T NEED AN ARMY, I HAVE GENESIS’ | Unable to sleep, Jesse went out for a smoke. Upon being joined by Mike, our hero proved to ol’ sourpuss that Genesis was real by having him break a glass. (What a waste of a shot of whisky.) Convinced that maybe something as real as crazy was going on, Mike finally handed over a card given to him by a parishioner. When the woman had told him God had stopped by her, uh, dance hall, he’d assumed she’d just fallen back off the wagon. But now… well… Armed with this new intel, Jesse, Tulip and Cassidy took off the following morning. Hot on their heels, the Saint paid a visit to Mike. (Was it absolutely necessary for him to kill Mike’s dog? What does this show have against animals? Seriously — enough!) The reverend knew that his puny knife couldn’t keep the Saint from asking him where Jesse was headed. “But,” Mike said, plunging it into his own chest, “it’ll stop me from sayin’.” 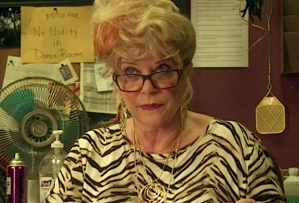 ‘YOU’RE IN TROUBLE NOW’ | At She She’s — a bizarro strip club with a live jazz ensemble — Cassidy made himself (a little too much) at home while Jesse and Tulip interrogated proprietress Tammy. When not being distracting with her resemblance to a youngish Eileen Brennan (see picture at right), she admitted that God had been there but insisted He wouldn’t answer the preacher’s questions. Rather, in His presence, “you’ll feel so naked and terrified, you’ll s— yourself,” she said. Refusing to let Jesse use Genesis to get better info out of Tammy, Tulip suggested that he just beat her into talking instead. As Tammy frantically called for security, security was busy fighting with Cassidy, who’d gotten handsy with a dancer. Ultimately, their scuffle ended in a gunshot… which came through the wall and hit Tammy. As she died, she at last admitted, “God didn’t come for the girls, he came for the jazz.”

‘YOU THINK YOU’VE SEEN IT ALL UNTIL YOU’VE SEEN THE AMAZING GANESH’ | Later, Jesse and Tulip retired to their hotel room — with Cassidy in one of his own. While the vampire took special notice of a commercial for the Amazing Ganesh, maybe even recognizing him, Tulip reminded Jesse that, after a really bad day, there was nothing she liked more than… to lock herself in the bathroom?!? At first, this seemed strange as hell. But quickly, its purpose became clear. Her lover was to beat down the door to get to her. With every punch he threw, every step closer he got, their excitement grew until finally, they were able to consummate their reunion. Afterwards, Jesse stepped outside for a smoke and was approached by the Saint. “Stop,” the preacher commanded. But, rather than freeze, the Saint took aim!

So, what did you think of the Season 2 premiere of Preacher? Grade it in the poll below, then hit the comments with your review.