Hank Schrader’s death was a real punch in the gut to Breaking Bad fans… but Dean Norris enjoyed every minute of it.

“Yeah, man, I loved it,” the actor tells TVLine, reflecting on filming “Ozymandias,” the pivotal episode of AMC’s Emmy-winning meth-trade drama that first aired in September 2013. In it, DEA agent Hank, wounded after a shootout with a murderous band of neo-Nazis, refused to beg for his life (despite his brother-in-law Walt’s pleas) and told Nazi leader Jack to “go f–k yourself” before taking a fatal bullet. 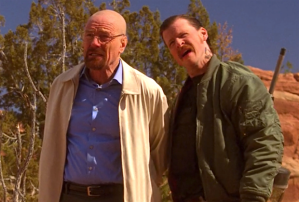 Norris, currently co-starring as crime boss Uncle Daddy on TNT’s Claws, remembers that creator Vince Gilligan clued him in on Hank’s ultimate fate pretty far in advance. “Vince told me that about two years ahead, because we knew we had the last two seasons,” he says. “He kind of took me aside and said, ‘This is how it’s gonna happen.’ I think he almost said the lines, literally, two years ahead of time. ‘You’re gonna die, but you’re gonna go out with your dignity.’ And I was like, ‘Great!'”

Filming Hank’s final moments happened quickly, he recalls: “We shot the essential part of that in one shot, in one take. We had three cameras going: one to the bad guys, one to Walt, and then I said, ‘Can I just have one little camera, just a moment to myself?’ They had all three going at the same time.” (Rian Johnson, who’s currently directing Star Wars: The Last Jedi, helmed the “Ozymandias” episode.)

Norris says he “kind of intentionally” has never sat down and watched Hank’s swan song, or any episode of Breaking Bad, “but I would like to sometime, when I get some distance… Maybe when my son gets into college, I might sit down with my oldest. He’s a freshman in high school. I’m kind of thinking this would be a time I’d want to sit down and watch the whole thing, from beginning to end again… when he’s old enough to watch it.”

Breaking Bad die-hards: Drop your favorite Hank memories in the comments below.