Blood, blood everywhere! The midseason premiere of The Haves and Have Nots began with not one but two characters wearing red — Q, collateral damage in War’s vendetta against Candace, and Melissa, who slit her wrists in the wake of her father’s death. Did either or both of them survive? Read on…

‘MY NEPHEW DIED’ | Picking up where “In Pursuit of Prey” left off, “The Fallout From War” began with Hanna emerging from the hotel bathroom, an unconscious Q in her arms… saying that it was too late to help the little boy. As Mitch called for an ambulance, Benny and his mother collapsed in anguish. At the hospital, a tearful Benny borrowed Hanna’s phone to call Katheryn. “Where’s your mother? Is she OK?” Mrs. Cryer asked. Through sobs, Benny told her what had happened, sending her racing to be with Hanna. Afterward, Q’s grandma lamented how hard a life he had had, how much brigher a future she’d wanted to give him. “Life is a loop, Benny — it’s all gonna come back around” — something Candace never understood, she noted. Benny tried to calm her by suggesting that they pray. But she said she didn’t have anything left to pray for. “You just stay right here,” he whispered, unsure of how to reach her. (Katheryn couldn’t get there fast enough!) When Mitch came down the hall, Benny threw himself into his arms, crying that he was going to kill War. Just then, Rose arrived, announcing, “I’m in this,” and asking who’d shot at Mitch. As soon as Benny offered up War’s name and info, Rose made a call, ordering the D.A.’s body dug up and put in his trunk. “Unleash all hell on wherever he is!” 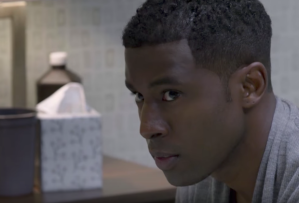 ‘WAKE UP, BITCH!’ | At the Harringtons’, Jeffrey called for help for Melissa, then when she passed out, turned to his mother for assistance. Big mistake — obviously. After telling her son to “put some bass in your voice, please,” Veronica complained that “that damn bitch” was “bleedin’ all over my $1,100 sheets” and attempted to slap her back into consciousness. (How wrong is it that I cracked up every time Veronica smacked Melissa? Pretty wrong, right? Anyway… ) Informed by Jeffrey that his fiancee’s father had died, Veronica was characteristically unsympathetic.

‘HERE I AM WITH NOTHING AGAIN’ | At the fancypants hotel, Candace, unaware of the tragedy unfolding across town, dropped in on Erica and lied that she hadn’t hooked up with anyone that evening, much less Charles. Naturally, Erica was surprised to learn that Candace was staying there rather than at the Fountain Drop. When Benny called, his sister sent it to voice-mail, then waxed nostalgic about when she’d had millions. While Candace borrowed a dress, Erica texted War and found out that he’d killed Q in a shootout. Busted by Candace, Erica insisted that she’d only been texting David. As Candace was leaving, Erica asked for a (Judas) hug and seemed to have second thoughts about double-crossing her. 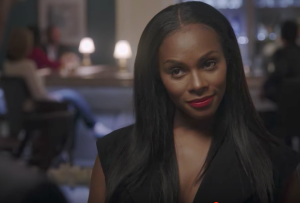 ‘SHE HAD TO ASK YOU TO STOP MID-STROKE?’ | At the bar of the ritzy hotel, David confessed to Oscar that he feared he’d blown it with Erica. Upon hearing the details of their night, Oscar suggested that maybe Erica was playing David… maybe. Or he was moving too fast. “Watch your heart,” Oscar warned. “Take your time.” Good advice, not that David was about to listen. When Erica texted, saying she hoped he’d made it home safely, Oscar advised him not to text right back. As soon as Jim joined them, he noticed that Candace was there, too. “Oh, Miss Young,” Jim said, calling her over. How was she? “I’m as good as I look,” she quipped. Jim delighted in telling Candace that the police now had all of her blackmail photos — and blurting out to David that she’d killed Quincy and buried him in her own backyard. “What fool did you get to help you” kill Quincy? David asked. Your son, she replied. Speaking privately with Candace, Jim tried desperately to get her to sleep with him. “Damn,” he huffed upon failing.

‘I’M THE VILLAIN?’ | With Wyatt’s detox going badly, the duo from the drug-treatment center decided that they had to take him to the hospital. At the same time, Veronica threw her weight around to make sure that Melissa was getting immediate and exquisite care. And also, to kick some poor woman out of the waiting area. “You just can’t do it, can you?” Jeffrey marveled. Do what? she asked. “Not be a bitch.” As if she hadn’t already proven her son’s point a hundred times over, she called and ordered the maid to come to work, never mind that it was 4am and she’d have to take a bus. Just then, David reached Jeffrey and learned that Melissa had attempted suicide. Upon hearing that her ex was on his way over, Veronica was delighted. Less so when Katheryn arrived… !

What did you think of the episode? Grade it in the poll below, then hit the comments.