If you left your TV on after Tuesday’s Pretty Little Liars, you might have stumbled upon a preview of another female-powered Freeform series: the upcoming women’s mag-set The Bold Type. (Points for the clever title!)

The show — created by Sarah Watson (Parenthood) and based on the life of Hearst Magazines COO and former Cosmopolitan editor-in-chief Joanna Coles — officially debuts with a two-hour premiere on July 11, but the pilot preview provides a substantial sampling of the drama’s “stealth feminism.” 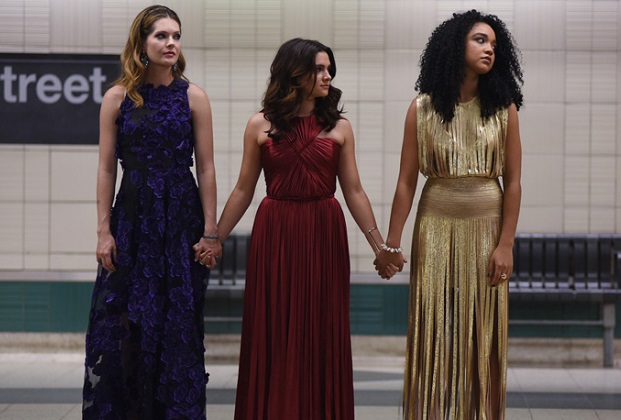 Jane (played by Faking It‘s Katie Stevens), Kat (Chasing Life‘s Aisha Dee) and Sutton (Political Animals‘ Meghann Fahy) are friends who work together at the Cosmo-esque publication Scarlet. Jane’s first day as a newly promoted writer is off to a bad start, with editor-in-chief Jacqueline (Transparent‘s Melora Hardin) rejecting all of her pitches. Rather than being a Mean Boss Lady, Jacqueline pushes Jane — she even ignores a call from Beyoncé to counsel Jane! — and gives her new writer an assignment that hits close to home. The resulting article about stalking her social media-less ex to get closure on their breakup earns a glowing review from Jacqueline.

Sutton, meanwhile, is still toiling away as an assistant, but there are big developments in her love life: she’s in a secret, no-strings-attached sexual relationship with board member Richard (Mad Men‘s Sam Page). When Jane and Kat discover the affair, they’re understandably concerned about what it would mean for Sutton’s career, if the truth ever came out. Life isn’t exactly fair, so Richard will probably get a pat on the back, while Sutton will be known as the assistant who slept with a superior, her friends argue. But this is more than just a fling for Sutton, so she tells Richard that she deserves to be the girl he can’t stop thinking about and that she wants to be asked out on a proper date — which he then does.

Social media boss Kat, perhaps the boldest of The Bold Type, fights for an article when a spread about a Muslim, lesbian artist falls through. She goes directly to the artist to get her approval for the piece and ends up bonding with the young woman. The two click so much that a distressed Kat practically comes apart after the woman is detained for smuggling vibrators, which Kat gave her, into a repressed foreign country. So maybe Kat is not as straight as she earlier declared?

What did you think of The Bold Type? Grade the pilot via the poll below, then hit the comments to let us know if you’ll be back for the official premiere.