Now that the smoke has cleared — sorry — on Better Call Saul‘s third season, we’re left with plenty of burning — again, sorry — questions. Did Chuck actually die in that fire? Will this tragedy push Jimmy further towards the dark side and becoming Saul Goodman? And where did they find a functioning Blockbuster store to film in??

TVLine reached out to Saul executive producer Gennifer Hutchison, who penned the finale, and she graciously agreed to walk us through that fiery conclusion, what that look Gus gave to Nacho might mean, Jimmy’s decision to torpedo the Sandpiper settlement, Mike’s “push-pull” arc in Season 3… and what the writers have planned if (and, hopefully, when) the show gets renewed for a fourth season.

TVLINE | I have to start with the obvious question: Is Chuck dead? And could Michael McKean return to the show, even if he is?
Michael McKean could always return to the show! [Laughs] The way we tell story on our show, we’ve built in ways for characters, even if they have perhaps passed away, to come back. The ending is intentionally a bit ambiguous, so that’s a little bit of a wait-and-see… although it does not look really good for him.

TVLINE | Was that ending your sneaky way of forcing AMC to renew the show? Because it can’t end like this, can it? Or did the writers talk about this possibly serving as a series finale?
[Laughs] We didn’t talk about that. We’re always hopeful. We always hope to be able to tell the story, and hope that AMC will kindly allow us to continue. 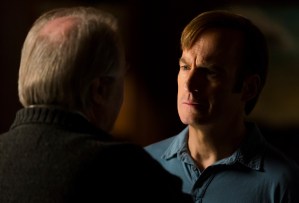 TVLINE | Whether Chuck dies or somehow survives the fire, this is going to affect Jimmy in a big way. Is this another step towards him becoming Saul Goodman?
I think that’s definitely one of the things we were going for with this: finding ways to untether Jimmy McGill just a little bit more, and push him more towards Saul, in that final confrontation with Chuck, and that final scene at the end.

TVLINE | Yeah, it seemed like when Chuck was saying those horrible things to Jimmy, he was already thinking about what he might do, and was trying to push Jimmy away.
Yeah, I think that’s definitely a possibility. There’s so much going on in that scene, and it’s so emotional… even though Chuck is very clinical in how he speaks, there’s so much emotion going on. I think there are like five or six different things going on in his head at that time, and that absolutely could be one of those things. 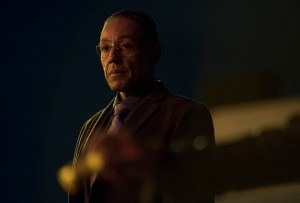 TVLINE | I was very happy to see that Nacho survived, because I was worried about him. But I did notice that look Gus gave him. Is he on to Nacho’s scheme to swap out Hector’s pills?
I don’t know Gus has figured out exactly what has happened, but I think he definitely realizes that there’s a little bit more going on there than meets the eye. You know, Gus is always the smartest person in the room.

TVLINE | Gus stepped in and saved Hector’s life, after he said a bullet to the head was too good for him. Is this just a case of Gus wanting to finish off Hector himself?
I think that’s a fair assessment. I find it kind of amusing that Gus has spent much of this season preventing other people from killing Hector. [Laughs] When Hector is someone he very much wants dead. But yeah, that’s a pleasure that he wants to save for himself.

TVLINE | It was also great to see Kim take off her lawyer hat and just chill out with some DVDs from Blockbuster. Did you have to build that Blockbuster set from scratch, or were you able to still find a functioning one out there?
[Laughs] Yeah, that was a set. A very small set that was very specifically filmed to allow for the smallness of the set. But obviously, we cleared Blockbuster and recreated all that stuff. 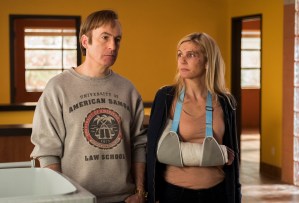 TVLINE | We saw Jimmy give up his settlement for Irene, so he’s not fully Saul Goodman yet. Why would he torch his client base and give up that money? Was it Kim’s accident that made him rethink things?
Yeah, and the settlement is still in play. He’s just not getting it anytime soon. But Kim’s accident is a huge wake-up call for Jimmy. He’s been thinking so much about, “I’ve got to keep this law firm running, because that’s the core of my relationship with Kim. If we don’t have this office, we don’t have a relationship.” And that’s not it at all. If he doesn’t have Kim, he doesn’t have that relationship. He’s sort of realizing, maybe not directly, but indirectly, he has contributed to Kim pushing herself too hard this whole season. The Kim thing pushes him towards Chuck, and then Chuck pushes him towards wanting to make amends with Irene.

TVLINE | We didn’t see Mike at all in the finale. So was his arc this season all about getting him into the Gus Fring fold?
Yeah, I think a lot of this season for Mike has been about him deciding who he wants to be — that push-pull of the criminal world and the family. Just as Jimmy is constantly being pulled between Jimmy and Saul, Mike is constantly being pulled between being a legit person and doing the thing you’re really good at in the criminal world. He is really good at it, and sometimes that’s hard to resist.

TVLINE | The decision to bring Gus Fring back: Was that always in the plan, and why did you choose to do it this season?
I think once we knew that we’d be telling Mike’s story as well, it always felt inevitable that Gus would come back in some way. It was more just a discussion of when, and what that might look like. It started to feel maybe a little [like we were] artificially extending Mike’s storyline, pre-Gus, at a certain point, especially with things escalating with Hector. We know Gus is connected to Hector, so it just felt really natural to bring him in at this point.

TVLINE | This show has an obvious end point, being a prequel. How long can this show go? Do you have, like, a five-season plan mapped out? Or could it go past the events of Breaking Bad, with the scenes we’ve seen of Gene in Omaha?
That’s definitely a possibility. Having those flash-forwards allows us the option to maybe delve a little deeper into the future. But there’s no explicit plan. Obviously, we talk about it, but we’re still kind of figuring out exactly, rhythmically, what this journey looks like. And even when we say, “Oh, we want to get to this point,” sometimes you get there much faster or much slower than you initially expect to.

Saul fans, drop your post-finale thoughts in the comments below.