As thrilling as it is to have So You Think You Can Dance back in all its original glory, the Fox series’ surprising Season 14 renewal came with a frustrating caveat: We’re only treated to one hour of Cat Deeley-hosted Dance goodness every week, instead of the three or four hours that previous summers offered up. (Damn you, practical TV execs!)

What’s more, I’m not sure SYTYCD is using its precious hour the right way. Monday’s episode, which wrapped up the Los Angeles auditions, dedicated a whole segment to performers of the “triple-jointed” style — that is, freaky, freaky movements of the limbs that (presumably) none of us were prepared to see. When someone’s armpit isn’t in the right location, it’s time to call it a day.

Ultimately — and not unexpectedly — the triple-jointers did not survive Mandy Moore’s intense choreography lesson, and they were sent packing, along with affable stepper Blessin Giraldo. But there were two dozen contestants who did leave the choreography round with tickets to The Academy, and I couldn’t help but wonder why none of those promising dancers, of whom we will surely become fans, were given a second of screen time.

But perhaps I can’t complain, given the five Academy-ready auditions that were also packed into Monday’s installment. Below, my rankings of those tryouts:

5. Sade Keinu Austin (Hip-Hop) — Though Sade brought tons of energy (and her adorable mom!) to her audition, her choreography wasn’t unique or varied enough to be among the night’s most memorable, leaving me surprised that the judges didn’t test her with Mandy Moore’s instruction first. Plus, her tendency to mouth the words of Missy Elliott’s “WTF (Where They From)” as she danced was particularly distracting. 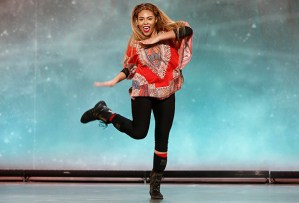 4. Tristen Sosa & Jensen Arnold (Samba) — The younger sister of former SYTYCD contestant-turned-Dancing With the Stars pro Lindsay Arnold, Jensen delivered the same sass and charisma on the dance floor that we’ve come to expect from her sibling. But her partnering work with Tristen wasn’t nearly as polished as I would have anticipated, resulting in a half-hearted end to what could have been a fiery, sexy samba from start to finish.

3. Matthew Deloch (Contemporary) — Although Matthew’s gymnastics lacked power at the beginning of his piece, he worked his way up to a contemporary routine that showcased gorgeous control (those pirouettes!) and a fearlessness that I didn’t expect from someone who cried his way through dance classes as a child. That said, I have no idea what Matthew’s performance actually meant to him — and a lack of emotional connection to his dances could hinder the young hopeful at The Academy.

2. Dustin Payne (Pop Locker) — Enjoyable as it is to watch contemporary dancers split-leap until their legs give out, it’s much more fun to watch a performer like Dustin, who used every dance move in his arsenal to win over the judges. I so hope that Dustin can hold his own in other styles, because his knowledge and mastery of hip-hop — from pop-locking to tutting — was a joy to behold.

1. Inyoung “Dassy” Lee (Pop Locker) — Dark horse alert! Anyone else get a Jaja Vaňková vibe from Inyoung’s wonderfully unexpected tryout? Fusing the jazzy mood of her soundtrack, Shirley Bassey’s “Big Spender,” with hard-hitting pop-lock movements, Inyoung delivered the evening’s most confident, creative, refreshingly subversive audition. If she can bring that same bold authenticity to other dance styles, Inyoung — who moved to the United States just to be on So You Think You Can Dance — could make major waves in Season 14.

OK, your turn! Which of Monday’s auditions — if any — blew you away? Drop a comment below with all of your thoughts on the episode.