In the Part 3 premiere of The Ranch, Ashton Kutcher is reunited with former That ’70s Show costar Debra Jo Rupp. Playing mother to Elisha Cuthbert’s Abby, Mrs. Phillips proves not too fond of Colt in wake of her daughter’s decision to end her engagement to Kenny.

Disapproving ‘rents are the least of Colt’s problems, though. Picking up immediately where last season left off, Heather shows up on Colt’s porch to tell him that she’s pregnant with his child. Having planned on proposing to Abby, Colt is practically at a loss for words, which makes things especially difficult when he needs to make small talk with Abby’s dad (Supernatural‘s Jim Beaver) ahead of Christmas Eve mass. 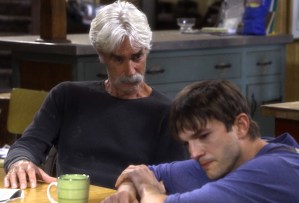 The episode’s best scene immediately follows, as Beau wakes up on Christmas morning to find a teary-eyed Colt sitting at the breakfast table. After the typically stern rancher gifts Colt with a scrapbook he made compiling every article about the former football player’s career, Colt tells his dad that Heather is pregnant. This leads to a warm exchange between father and son, after Colt confides in Beau that he’s worried about losing Abby. Beau ultimately gives Colt the best advice he can, and that’s to make sure that his unborn child becomes his priority.

Colt eventually goes to meet Heather and tells her that they’ll make great parents. He then proceeds to take out the engagement ring he had bought for Abby and tries to propose to Heather, at which point she tells her well-meaning ex that she wants to have an abortion. As such, we’re left on another cliffhanger, but that’s the great thing about Netflix: We don’t have to wait to see where things pick up in Episode 2!

What did you think of The Ranch‘s Part 3 premiere? Grade the episode via our poll.