Oh, how I’ve missed you, So You Think You Can Dance — the real you, that is.

After shaking things up in 2015 with the lackluster “Stage Vs. Street” theme, then introducing SYTYCD Jr. in 2016, the Fox competition series at last returned to its original form with Monday’s Season 14 premiere. There were no teams, no child contestants and — perhaps the best news of all — not a single frame of footage featuring Jason Derulo. Praise be.

Instead, as the auditions kicked off in Los Angeles, it seemed all was right in the SYTYCD world: Mary Murphy was back behind the judges’ table, joined by Nigel Lythgoe and series rookie Vanessa Hudgens, whose Grease: Live performance I still think about regularly; Cat Deeley was effortlessly charming with the contestants, even when faced with the most gut-wrenching of life stories to discuss; and the auditions themselves ranged from breathtaking to puzzling — or both, in the case of one particular tryout.

It’s too soon to tell if the eventual Season 14 champion was among Monday night’s bright-eyed rookies — but in the meantime, let’s rank the auditions that garnered a ticket to The Academy.

6. Mark Villaver (Breaking/Contemporary) — Mark seemed completely at ease both in front of the camera and on the stage — no easy feat, given that he was the season’s first auditioner. But despite his marvelous ability to fuse the staccato movements of breakdancing with fluid contemporary steps, Mark’s performance didn’t have that moment: the goosebump-inducing move that leaves us saying, “How did he do that?!” Dressed in a drab all-black ensemble, and saddled with the first performance slot of the season, Mark’s routine was regrettably easy to forget. 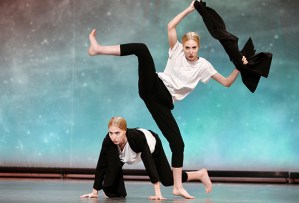 5. Alexis Gilbert (Jazz) — Although she was clearly nervous in the moments before her audition, Alexis proved with her piece that she’s both physically strong and completely dazzling to watch. (You work that long hair, girl.) But given her choice of music — Bishop Briggs’ bass-heavy “River” — I so wish that Alexis had embodied a more badass, serious character during her routine, instead of shooting the judges a winning smile at every turn.

4. Robert Green (Hip-Hop) — Putting aside his distracting poncho get-up, Robert brought an enthusiasm and creativity to the dance floor that was reminiscent of Twitch and Fik-Shun before him. I do worry that his choreography will become a tired schtick, and his skills won’t translate into other dance styles. But on a show that tends to favor emotionally weighty, tearjerking routines, Robert’s good-plain-fun audition was a joy to watch.

3. Kristina & Vasily (Latin Ballroom) — Many a real-life couple has taken to the SYTYCD stage, only to perform a routine that lacks chemistry or sensuality, despite their offstage romance. Not the case for Kristina and Vasily. Even when they weren’t literally kissing during the dance, the couple’s love for each other — and for Latin ballroom in general — was impossible to ignore. Plus, Kristina’s legwork? Fire emoji. Fire emoji. Fire emoji.

2. Anastasiia & Viktoriia (Modern; pictured right) — Truthfully, I thought these twin sisters should have gone to the choreography round first, instead of sailing through to the Academy; captivating as it was, their routine lacked synchronization and failed to prove they can handle partnering work outside of their own. Having said that, I will probably go to bed thinking about those few seconds in the audition where they mouthed a series of words to the audience and then clung to each other for dear life. Haunting, dizzying and completely entertaining, the sisters’ performance proved they can tell quite a powerful story — and hopefully not just when they’re dancing side by side.

1. Darius Hickman (Contemporary) — Oh, my heart. Having lived through a tumultuous childhood (including a drug-addicted mother and domestic violence), Darius seemed to pour every ounce of adversity into his audition, resulting in a performance that was as moving as it was technically astonishing. Although his choreography seemed inspired by the sadness and anger he experienced in his youth, Darius’ lines were still so elegant, his gymnastics so graceful, his passion for dance so evident and authentic. His ticket to The Academy was a foregone conclusion — and a spot in the Season 14 finale doesn’t seem out of the question, either.

With that, I hand it over to you. Has SYTYCD sucked you back in with its return to original flavor? Which of Monday’s auditions impressed you the most? Drop a comment below with all of your thoughts.