After Monday’s episode of Shadowhunters, I’m thinking Maury Povich should be made an honorary member of the Clave.

Following last week’s big paternity reveal — Clary was finally told that she isn’t Jace’s sister, after all — tonight’s episode confirmed that Jace is actually from the Herondale bloodline. More specifically, he’s the grandson of Imogen (aka the Inquisitor)!

Elsewhere, Izzy’s attempt to help Simon shake Raphael off his back took an interesting turn when the duo chatted with Raphael’s (seemingly) older sister, who implied that Izzy and Simon would make a great couple. (I think we have a #Sizzy ‘shipper on our hands!)

Of course, the real drama of this week’s episode came from Magnus and Valentine’s adventures in body swapping. Though their souls were eventually returned to the correct meat bags, the experience left its mark — so to speak — on Magnus, who relived horrific childhood memories while being tortured with the agony rune.

“He has a rally troubled history, so building upon that is really important,” Harry Shum Jr. tells TVLine of Magnus’ background, which will continue to be explored this season. “It’s not something he wanted to revisit. And it will definitely affect his storyline with Alec, hopefully bringing them closer together and giving them a deeper understanding of one another. Alec is going to become much more sympathetic to life as a Downworlder.”

And if you picked up on a little tension between Alec and Magnus in their final scene together, don’t worry, you’re not totally insane. 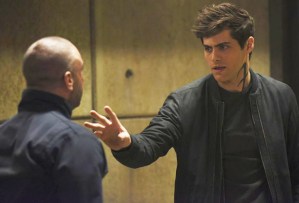 “When you revisit a difficult childhood memory or a traumatizing experience, you sometimes end up redirecting your feelings about it,” Shum Jr. explains. “You can’t always say ‘This is what I went through’ and move on. The frustration lies in when other people don’t understand why you’re acting a certain way.”

As for Sebastian — who helped Clary tap into her true power this week, before being turned down for a date with her — don’t expect to see Magnus warming up to him any time soon.

“Magnus doesn’t trust any Shadowhunter,” Shum Jr. reminds us, save for his brooding boyfriend. “So I would say a big fat no right now. That might change over tim. We’ll see.”

Your thoughts on this week’s developments? Hopes for the rest of Season 2B? Drop ’em in a comment below.