Kevin Spacey briefly traded the White House for the Great White Way on Sunday as host of the 71st Annual Tony Awards on CBS. 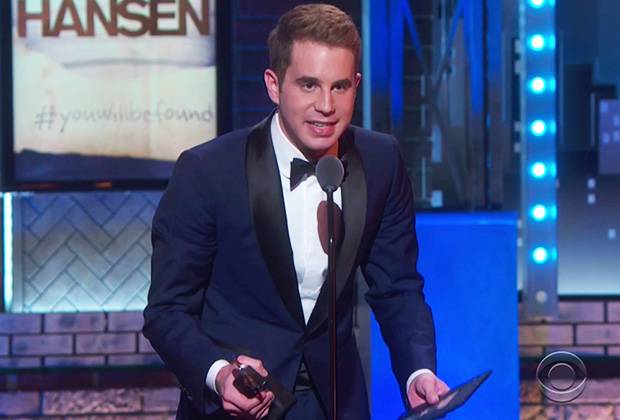 Spacey’s opening number — a self-deprecating montage of songs about how he knows he was no one’s first choice to host — opened with him dressed as the titular character from the Broadway smash Dear Evan Hansen, complete with a #Host arm cast. (“I know they love James Corden, but I’ll show them I came to play,” he crooned.) Spacey’s Hansen tribute then transitioned into a Groundhog Day spoof, which featured a surprise guest: Stephen Colbert as — who else — the groundhog!

Next up was a play on this year’s most-nominated show Natasha, Pierre & the Great Comet of 1812 — which star Josh Groban heartily appreciated from the audience — followed by an awkward interaction between Spacey and special guest Whoopi Goldberg in which he asked her how long she’s been in the closet.

(Speaking of closets, Spacey poked fun at the speculation of his own sexuality while dressed as Sunset Boulevard‘s Norma Desmond. “I’m coming out! No, wait…” he belted.)

At the 1991 Tony Awards, Spacey won Best Featured Actor in a Play for Lost in Yonkers, beating out the likes of Adam Arkin (I Hate Hamlet), Dylan Baker (La Bête) and Stephen Lang (The Speed of Darkness). Spacey was also nominated for Best Actor in a Play in 1999 for his role in The Ice Man Cometh, but he lost to Brian Dennehy (Death of a Salesman).

Grade Spacey’s opening number, as well as his job as host. Then drop a comment with more of your thoughts below.