Warning: The follow recap contains spoilers from the Season 5 finale of Orange Is the New Black. If you’re behind on your binge-viewing, bookmark for safekeeping and return to discuss at a later time.

You’d be hard-pressed to find someone who thought Piscatella was going to make it out of Orange Is the New Black Season 5 alive. But what binge-watchers probably didn’t expect was, shall we say, the unceremonious nature of his death.

Following his decision to take Red and her prison family hostage in Episode 9, it would have been more cathartic to see Red (whose hair he ripped from her scalp with a knife) or Alex (whose arm he broke to show who’s boss) put a bullet in his head. And if not them, then Taystee, who nearly pulled the trigger when she finally came face to face with the man who incited the violent protest that led to Poussey’s death.

Red knew better, though, and released the barbaric CO from captivity at the end of Episode 13. It didn’t have to be said aloud: She knew full well that killing him, though perhaps justified, would take away a piece of the shooter’s humanity. And so she let him go, only for him to be accidentally shot between the eyes by a trigger-happy member of the SWAT team who assumed he was a non-compliant inmate. It’s ironic, though, isn’t it? Piscatella was ultimately freed by the very inmates he despised most and was shot dead by the type of no-nonsense officer he always aspired to be. 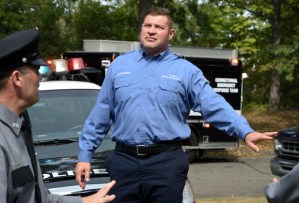 It could be argued that the Piscatella storyline was far too over the top, but that might have been the point. Coupled with the inmates’ irreversible decision to riot in the first place, OITNB is almost surely heading towards a major reset in Season 6. As Season 5 came to a close, the ladies of Litchfield were forcibly removed from the prison after a three-day revolt and loaded onto buses to be taken elsewhere.

As for the even bigger cliffhanger? A newly engaged (!) Piper and Alex stood hand-in-hand with Red, Nicky, Gloria, Taystee, Cindy, Suzanne, Blanca and Freida, waiting for the inevitable entry of armed officers and unsure if they’d make it out alive. Right before the scene faded to orange, a smoke bomb went off, leaving us an entire year to guess what happens next. (Who ever thought there’d be a more stressful cliffhanger than Daya holding Humphrey at gunpoint?!)

Should Piper survive — and let’s be real, Piper is going to survive — it wouldn’t be a surprise if her prison sentence was extended beyond the three months we know she has left. This in turn would give the writers the leeway to pick up the pace in Seasons 6 and 7 without having to worry about writing out their lead.

* Leanne and Angie set fire to all of the inmates’ records — though we can’t imagine there aren’t digital copies stored somewhere… right?

* Cindy and Taystee were able to wake Suzanne from her lithium-induced slumber, but that probably goes without saying (see photo above).

* After a pep talk from Nicky, Vince turned up at Litchfield, leaping past security to tell pregnant wife Lorna that he’ll be there for her every step of the way.

* Linda attempted to tell the SWAT team that she was not a prisoner, but in fact an employee of MCC. Still pissed about being lied to, Boo made it impossible for anyone to believe Linda, telling an officer that she, too, worked for MCC. A bunch of desperate prisoners subsequently followed suit.

* Gloria, who was unable to escape through the hole in the fence and get to her son, learned that he made it out of surgery alive.

* Pennsatucky, on the other hand, did manage to escape, taking shelter at the CO house in the woods. Unfortunately, she ended the episode willingly in the arms of Coates.

* Chang also escaped through the fence, but not before bidding Litchfield a proper adieu. 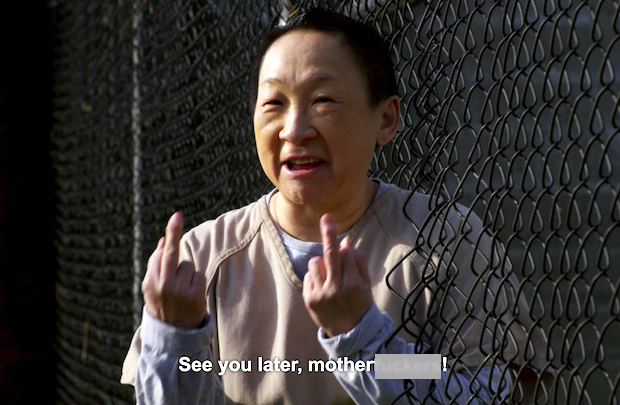 What did you think of the Orange Is the New Black finale? Grade the episode, as well as Season 5 via the following polls, then drop your thoughts in a comment below.