Clone Club, what did we learn from Orphan Black‘s Season 5 premiere? According to Sarah and Alison, it would have to be not to go into the woods, because bad things — very, very bad things — happen among the trees.

Let’s break down the action-packed episode, clone by clone:

SARAH | An injured Sarah makes her way across the island, hoping to find Cosima and a boat to get them far, far away from whatever attacked her in the woods. (My guess? It’s the product of an early Neolution experiment gone wrong.) The monster in the forest is so disturbing, even the hunters tracking Sarah back off as night approaches. That gives her a chance to sneak into the Revival village where Cosima is being held. But her sestra isn’t ready to leave the island. So Sarah goes off on her own to the boathouse. However, before she can escape, she’s hit with a tranq. Rachel appears above her and declares, “It’s a new day, Sarah.” 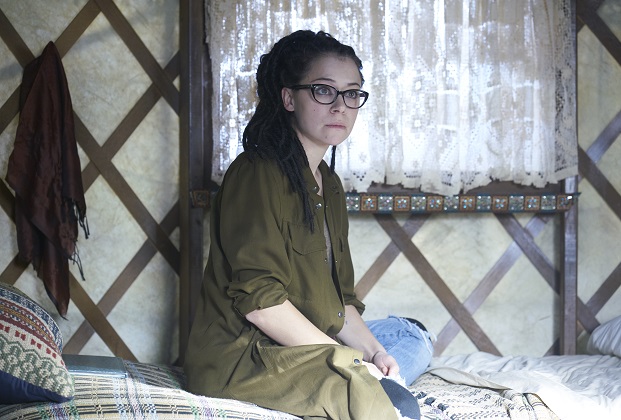 COSIMA | The science geek wakes up to find herself locked inside a hut, with her medicine missing and a note from Delphine: “Whatever happens, follow my lead!” It’s not long before a young woman named Mud, sporting a Pippi Longstocking vibe, shows up to give Cosima the 411 on Revival and all its (semi-creepy) wonders.

Founder P.T. Westmoreland’s self-sufficient community is “a decades-long pro-longevity study,” Delphine later explains. “This place, this is the heart of Neolution.” As such, Delphine — before being sent off to Sardinia — tells Cosima to follow the crazy science. She also informs her that the medicine is stashed in the medical trailer. That’s where Sarah finds Cosima, who refuses to leave until she gets answers for herself and her sestras. After Sarah takes off, Rachel discovers Cosima trying to administer the medicine into her uterine wall. Rather than threatening Cosima, Rachel offers to give her the shot. “I’m as invested in this as you are,” Rachel reassures her.  “You and I are going to cure us all.” 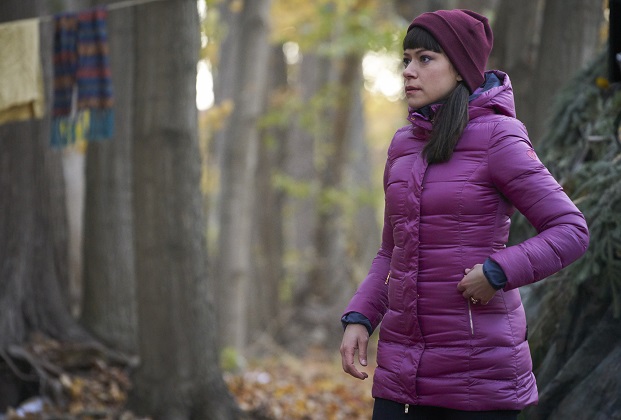 HELENA, ALISON & DONNIE | Felix instructs the trio to stay put in the woods, but of course, they ignore his orders. As Alison and Donnie start packing up, they’re attacked by some mysterious new players. One of them kidnaps Alison as her hubby hilariously runs off to the car, with his luggage in tow. (I don’t know that abandoning Alison is the best idea, Donnie. We’ve seen what she’s capable of with a glue gun.) Before Donnie can even get inside the vehicle, though, he’s also confronted by an attacker. “Oh Jesus,” he whispers as he spots Helena behind the bad guy, ready to pounce. Good news: She takes him down. Bad news: In the process, a branch pierces her very pregnant stomach.

BACK AT HOME | As if the drama in the two forests weren’t enough, Mrs. S and Kira have also been taken. As Felix searches for them, Art is saddled with a new female partner, Maddie Engers, who turns out to be a Neolutionist responsible for Alison’s kidnapping. She puts a gun to Art’s head and demands that Alison fess up Helena’s whereabouts, or Art’s a goner. Alison insists she doesn’t know Helena’s plans — and thankfully, Maddie believes her, not that it makes me hate the newcomer any less. (If the goal with this character was to make me wish one of the clones punches her before the season ends, then mission accomplished!)

Orphan Black fans, what did you think of the season premiere? Grade it via the poll below, then hit the comments to back up your pick!