Friday’s Drag Race tasked the four remaining queens with writing and performing new lyrics to RuPaul’s “Category Is.” Unfortunately, not everyone turned out to be, ahem, well-versed in the art of songwriting. Or rapping. Or dancing.

Naturally, some finalists fared better behind the mic than others; Peppermint, for example, crushed it with few critiques from producer Todrick Hall, while Shea Couleé and Sasha Velour managed to make their verses work after making a few adjustments.

And then there was Trinity, who basically forgot how to speak while recording her verse. Listen, I’m a big Trinity fan — Sister Mary Kuntz can slap my ass with a ruler any day — but when it comes to her skills as a songstress, Todrick’s face says it all: 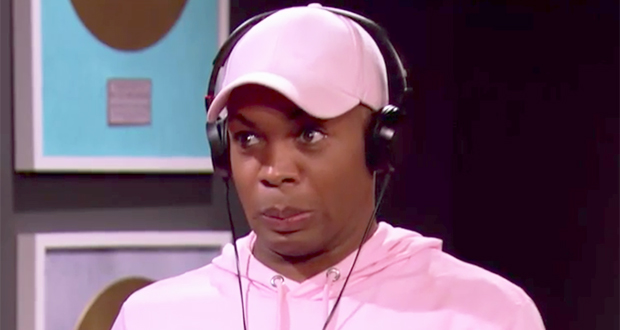 In addition to their performances, the finalists also appeared as guests Ru and Michelle Visage’s (phenomenal) podcast What’s the Tea?, where they opened up about the struggles that helped shape them into the queens they are today

Peppermint revealed the criticism she received from a “well-known and respected” New York queen who told her she couldn’t do drag as a trans woman; Shea recalled her identity struggle as a black person in a predominately white community; and Sasha and Trinity admitted to lingering feelings of regret over not sharing enough with loved ones they’ve lost. (In other news, when do we get to meet “Papa Velour”?!)

But the real waterworks came after this week’s runway challenge, when Ru asked each of the queens to offer advice to their younger selves. All four finalists bared their souls, but Peppermint’s speech to that little junior mint in the photo was absolutely heartbreaking — not to mention that it probably hit close to home for a lot of viewers, including yours truly.

When it came time for the big lip sync battle, all four queens came together to perform Ru’s “U Wear It Well.” And unless I was merely distracted by the finalists’ thoughtful voiceovers, I have to say… I kind of think everyone turned out an equal product.

And Mama Ru seemed to agree! In the episode’s final moments, she declared that no one was eliminated, and that all four finalists will return for the “grand finale” in two weeks. (Next week is the Ru-union.)