“This does not end well.”

Gloria is the first to say it, but we all knew things weren’t looking good as soon as Orange Is the New Black’s fourth season closed on Daya pointing a gun at Humphrey’s head.

The Season 5 premiere, “Riot FOMO,” picks up right where things left off. After firing a shot into the air to get her fellow inmates to quiet down, Daya puts a bullet in Humphrey’s leg, most likely hitting a vein. The prisoners then encourage Daya to finish him off, as Maritza starts kicking the back of his wounded leg, presumably in retaliation for making her eat that live mouse. 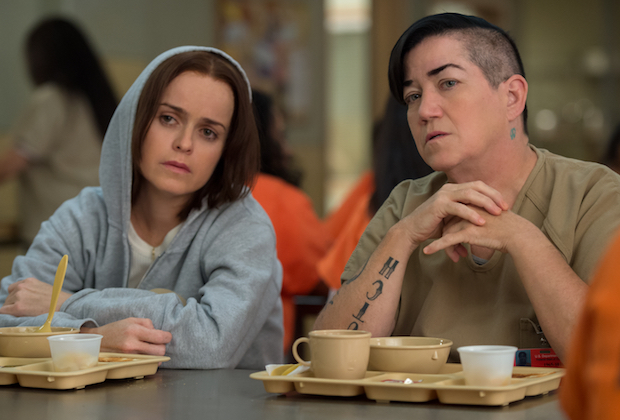 When Gloria turns up, she tries to convince Daya that it’s not too late to turn things around. Humphrey is still alive, and the inmates have yet to go fully berserk. Maria, however, has a different idea. She empties the box containing Judy King’s belongings and starts a collection of the inmates’ name tags. It’s their house now, and there’s no turning back.

As the riot escalates, Gloria rushes Humphrey, who at this point is coming in and out of consciousness, to the salon. Sophia, who was once a firefighter, is trained in emergency medicine, and Gloria begs of her to help save his life so Daya can avoid a murder charge. She agrees to help, but is unable to remove the bullet and stitch up the wound on her own. They rush Humphrey to medical, where Sophia and the only male nurse who didn’t flee the scene manage to save his life. Afterwards, they wheel his gurney into the recovery room, where he is restrained and placed between Suzanne and Maureen, whose battered face serves as a reminder of the barbaric fight he instigated between the inmates just days prior.

With all phone and internet connectivity shut down during MCC’s press conference, Caputo and the PR guy are in the dark about the riot happening on the other side of the prison. That’s until Taystee, Cindy, Watson and Alison come barging in, taking the two of them hostage. Still furious with Caputo for essentially clearing Bayley’s name and not mentioning Poussey during the press conference, Taystee punches him — hard — square in the face.

The women eventually write a statement for Caputo clearing Poussey’s name, and use an iPad to make a video. Then, using the PR guy’s Twitter account, they upload the video online, which is almost immediately picked up by the news and seen by Pearson Sr. and Piscatella.

Daya, meanwhile, is on the verge of a complete and total meltdown. Not helping matters are Maritza and Flaca, who bring to Daya’s attention that she’s probably going to wind up in max. Later that night, she manages to get hold of a working phone and tries to call Aleida. She unfortunately gets her voicemail. Even more unfortunate? Someone comes from behind and knocks her out. We don’t see who’s responsible, but whoever it is manages to get Daya’s gun before she can do any more serious harm.

* Alex and Piper attempt to steer clear of any trouble. Alex is still worried she’ll get caught for murdering Kubra’s hitman, and Piper apparently only has three more months left on her sentence. Be that as it may, they eventually come across Linda in a bathroom stall, and help her try to blend in by dressing up as an inmate.

* Nicky and Morello take cover in the pharmacy with Angie and Leanne, who are just looking for an easy high.

* Red breaks into what appears to be Piscatella’s office, where she finds a binder full of embarrassing photos. (Could these have something to do with the intel Caputo apparently dug up on the menacing guard towards the end of Season 4?)

* Per Red’s suggestion, Freida goes to the kitchen to try and grab whatever she can, but is eventually caught by the only two guards not taken hostage.

* Boo and Pennsatucky stay put in the prison commissary.

* Judy King locks herself in the library, only to find a grieving Soso.

* Blanca makes sure there’s no way out of the prison, locking up all exits as the prisoners take all of the guards hostage.

What did you think of the OITNB Season 5 premiere? Grade the episode via our poll, then sound off in the comments. (And please keep in mind that for the sake of those who don’t binge at warp speed, discussions should be about Episode 1 only; subsequent recaps will focus on later developments.)