Mitch Morgan may be alive when Zoo unleashes Season 3, but boy, is he in deep, as seen in these exclusive (and provocative) photos.

As a refresher: When last we tuned into CBS’ adaptation of the James Patterson novel, Mitch (played by Billy Burke) had made the ultimate sacrifice on the island laboratory of Panagaea, letting himself be mauled by feral hybrids so that his friends could escape by air. (Rewatch the frightful moment here.) But in the season-ending epilogue, which leapt forward a full 10 years, a grown-up Clementine (new series regular Gracie Dzienny) surfaced to tell Abraham that her father was in fact alive — and she knows where to find him.

Scroll down to get your first look at the fate that actually befell Mitch, to be revealed in the Season 3 premiere airing Thursday, June 29 at 10/9c….

Yep, that’s Mitch immersed in… something… while visibly scarred from the aforementioned hybrid attack. “That wasn’t a dream or anything. It did happen,” Billy Burke tells TVLine. “He got rescued at some point and put into this, for lack of a better term, ‘stasis/preservation tank.’ And he’s been there for some quite some time.” As evidenced in part by his unruly mane. “Oh yeah, that’s all mine,” Burke reports. “I grew that a couple of months before we started shooting, because I was clued into what we were about to do.”

Burke elaborates on the larger Season 3 plan (including Mitch’s captor as well as the sketchy-looking fellas below trying to free him) in an upcoming TVLine Q&A, where he also relays his enthusiasm for Zoo‘s bananapants summertime escapades. “I’m pretty much always down with these guys’ ideas,” he says, “because this is the wackiest show on television!” 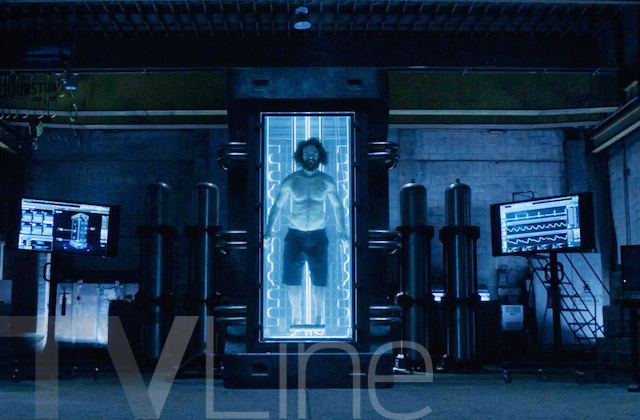 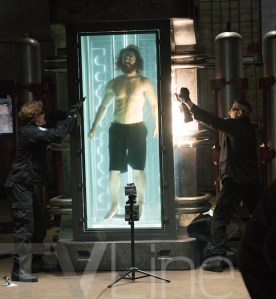 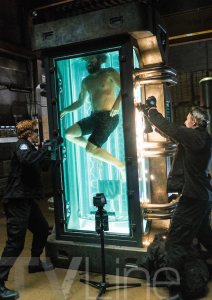