The last act of Supergirl‘s second season finale was a veritable minefield of plot twists, including Mon-El’s mysterious detour through a wormhole and the reveal of Season 3 villain Reign (now known to be played by Odette Annable).

But nothing made this editor’s jaw drop more than Alex’s surprise proposal to Maggie. Don’t get me wrong, I’m used to seeing TV characters making rash decisions following near-death experiences. But it was admittedly surprising to see Alex, who went on her first date with a woman just a few months ago, fearlessly embracing the idea of marrying one.

Maggie didn’t technically give her an answer (other than “Excuse me?”), but for what it’s worth, she didn’t look the least bit upset that Alex popped the question. In case you need a refresher, check out her reaction below. You can’t fake that kind of unbridled joy: 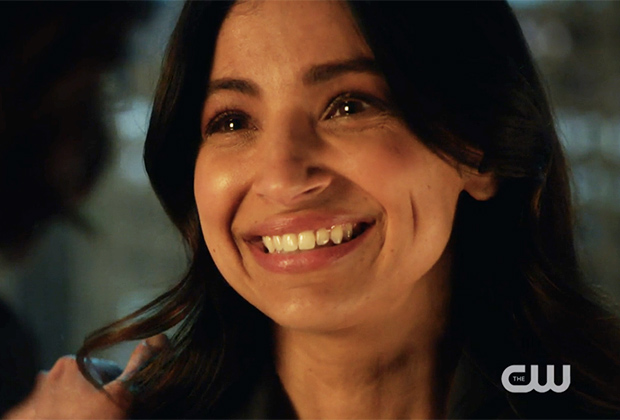 Like many viewers, I assumed Maggie would eventually settle on “yes,” or even “someday.” But the news that Floriana Lima is stepping down as a series regular is enough to make even the most devoted “Sanvers” ‘shippers pump their brakes.

According to a statement released by executive producer Andrew Kreisberg last week, Lima — who is “looking to pursue other opportunities” — will appear in “multiple episodes” of Season 3. How you choose to interpret that statement will reveal whether you’re a glass half-full or half-empty type of person; “multiple” could mean “10” just as easily as it could mean “two.”

Of course, the more surprising announcement came courtesy of Lima, who took to Twitter shortly after the news was released. “This role was only meant for one season,” she tweeted, much to the surprise of fans who had become invested in Maggie and Alex’s future. She continued, “I’m excited to appear in Season 3, as we see the #Supergirl story unfold #Sanvers #NotOverYet.”

It may not be over yet, but the writing is absolutely on the wall for “Sanvers.” So here’s our question for you: How do you predict Maggie and Alex’s story will come to a close, at least for now? Will Maggie end up turning her down completely? Or will she accept, only to be called out of town on a work-related assignment? Frankly, I’ll accept pretty much any outcome, save for Maggie being killed off — which I’m fairly confident the show would never do.

How do you think this love story will play out, given Lima’s limited screen time in Season 3? Cast your vote below, then drop a comment with more of your predictions.