You might think that a show about stand-up comedians would, you know, make you laugh a time or two. But Showtime’s morose, cliché-riddled new drama I’m Dying Up Here — premiering this Sunday at 10/9c — is more likely to make you hate yourself, everyone around you and humanity in general.

Set in L.A.’s vibrantly messy 1970s comedy scene, Dying follows the self-loathing comedians who work at Goldie’s, a stand-up comedy club owned by the no-nonsense Goldie (Melissa Leo), who has a proven track record of getting her comics on TV and even — the ultimate prize — a spot on Johnny Carson. Goldie’s comics are always begging her for more stage time and elbowing each other out of the way in hopes of making it big someday. And the intense pressure hits one comic particularly hard in the pilot, leading them to take their own life. (Are we having fun yet?) 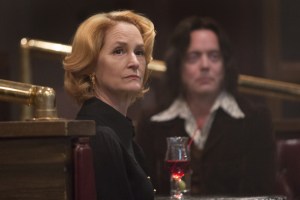 Goldie’s stable of struggling comedians includes bearded mope Bill (Andrew Santino), Southern belle Cassie (Ari Graynor), Mexican comic Edgar (Al Madrigal) and a half-dozen others. And we get to see a fair amount of their stand-up sets, peppered with then-current jokes about the passage of Roe vs. Wade and the Pet Rock. (We’re also reminded it was a much less PC era back then, with racist and sexist jokes that’d be booed offstage today.) That leads us to the show’s first glaring problem: The comics’ jokes aren’t funny. Because of that, we don’t buy into their talent and can’t get invested in their journey. And as soon as they step offstage, any semblance of humor dries up completely.

To put it bluntly, Dying‘s characters are a bunch of sour sons of bitches: jealous and bitter, foul-tempered and unlikable. There’s no friendship or affection among the comics; every relationship is transactional, even the ones that end up in the bedroom. You’d hope, in a show about comedians, to at least witness the bursts of joy inherent in the creative process. But that joy is utterly lacking here. I don’t dispute that some comedians really are this wounded and cynical. (Jim Carrey, who started out in this era of stand-up, is an executive producer here.) But the humor-to-pain ratio is way out of whack. There’s gallows humor, and then there’s wallowing in misery, and Dying veers way too hard towards wallowing.

The cast is probably too big, too: With nine regulars crammed together in Goldie’s club, there’s precious little room for any character depth beyond a few sketchy clichés. There’s the smart-ass cynic, the frustrated feminist, the naïve newcomers fresh off the bus, the Catholic dad who thinks comedy is a sin (“You think you can joke your way out of everything”)… we’ve met all of these people before, in better movies and TV shows. And the clichés extend to the show’s musical cues (straight from your local ’70s station) and visual choices, too. Dying doesn’t look like the actual ’70s as much as it looks like “The ’70s” seen in ’90s films like Pulp Fiction and Boogie Nights. There are even a few self-consciously showy tracking shots in the initial episodes, if the homage weren’t clear enough. 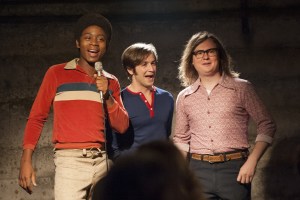 It’s a shame, because there are quite a few talented actors being wasted here. Leo, an Oscar winner for The Fighter, is a force of nature as Goldie, embracing her role as matriarch with brassy vulgarity. (“I nursed these f—king kids!” she rants in the pilot, clutching her breasts.) RJ Cyler has an effortless charm as upstart black comedian Adam, and Michael Angarano and Clark Duke have solid comedy-duo chemistry as Boston pals Eddie and Ron. Plus, the supporting cast is full of people who’ve been funny on TV before: Erik Griffin (Workaholics), Jon Daly (Kroll Show), Stephen Guarino (Happy Endings)… they’re just not given the chance to be funny here, unfortunately.

In hindsight, the decision to kick off the show with a suicide probably dooms Dying from the start. It casts a morbid pall over everything that follows, and the series only gets more and more grim from there. Life keeps kicking these characters in the teeth again and again, and we’re supposed to care… why, exactly? After Cassie opens up onstage about her parents’ sudden death, another comedian cautions her: “You don’t do sad s–t at a comedy club.” Exactly… so why didn’t this show take its own advice?