Warning: The following contains spoilers for Tuesday’s Season 5 finale of The Americans. Proceed with caution, comrades.

Just when Philip and Elizabeth think they’re out… the Center pulls them back in.

The Americans‘ Season 5 finale shattered the Russian spies’ dreams of returning to the motherland: Kimberly’s CIA dad got promoted to head of the Soviet division, making her an invaluable asset for Philip to hold onto, meaning the Jennings couldn’t abandon their post. Plus, Paige toughened up to the point where she could walk through that scary parking lot by herself at night, and Stan’s girlfriend Renee pushed him to stay with the FBI… in suspicious fashion. (Is she a Russian agent after all?)

To decipher all the spy games, TVLine reached out to executive producers Joe Weisberg and Joel Fields, who co-wrote the finale together. Read on for their take on the finale’s pivotal twist, the criticism of Season 5’s slow pace (“we were not intending it to be molasses”), why they chose the Elton John classic “Goodbye Yellow Brick Road” for a key montage — and a hint about how Philip and Elizabeth’s journey will end next season.

TVLINE | Philip and Elizabeth were on the verge of going back to Russia, but Kimberly’s dad’s promotion changed their plans. Are they basically trapped in this life now, and how is Philip going to respond to this, knowing how disenchanted he’s become?
JOE WEISBERG | “Trapped” is an interesting word. It does feel like they’re trapped, but they’re trapped because Elizabeth is so steadfast, and so much of a patriot. At the end of the day, she just can’t go home when they have access to an official who can get them the best intelligence the KGB has ever gotten. So it’s a funny way of being trapped. They’re trapped by her integrity, and her devotion to her cause.

I think you get one piece of how Philip’s going to react to that right in that final scene when, instead of getting pissed at her or demanding she change, he accepts it, and is compassionate and loving and kind with her, instead of some negative reaction. But how it’s going to affect him over time is something we’re going to have to wait and find out. I think it’s going to be very interesting to see. 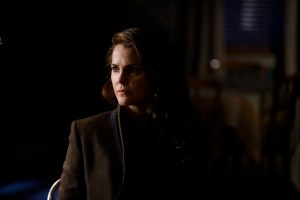 TVLINE | In that scene, Elizabeth says to Philip, “I don’t want to see you like this anymore.” She’s so good at bottling up her emotions, but she does really love Philip — and that love could affect their mission, right?
JOEL FIELDS | Well, it is affecting their mission, because she’s making this big offer at the end [for him to stop spying full-time]. That’s a big change in their mission, and in their lives. Here, you have her utter devotion to the cause finding a way to exist with what has become her utter devotion to her husband and her marriage. She’s torn in the sense that there’s a struggle in her, but she’s looking for a way to survive as an individual, and not suppress who she is, but also have a genuine marriage in which she acknowledges that her husband has to be true to who he is. If that’s not a statement about the experience of marriage, I don’t know what is.

TVLINE | Elizabeth’s always been the hardliner of the two. But a couple weeks back, after that mission where they killed Natalie and her husband in Boston, she was ready to go home. Why was that a turning point for her?
WEISBERG | There are a lot of different interpretations of that. We’ve been reading what people have been writing about it, and seeing that people took it different ways. For us, on the hardliner question: We didn’t see her having too much trouble killing Natalie. That was a Nazi collaborator who killed hundreds and hundreds of young Red Army soldiers during World War II. And Elizabeth doesn’t really believe in change or redemption that would make it hard to kill a person who’d done that. To us, what Elizabeth was so struck by and frustrated by was that Philip was now at a point where he couldn’t even kill that person! And at that point, it’s like, “F–k it. Let’s just go home.” And also in the context of all the struggles they’ve had, the yearning for home you’ve seen her having over the past season… it’s not like she, out of the blue, came up with “Let’s go home.” She had a strong pull towards home that she had, in a sense, been fighting. 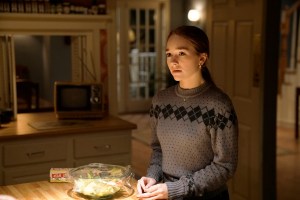 TVLINE | What’s Paige’s state of mind at the end of this season? She felt confident enough to walk through that parking lot alone, and she seems to be viewing Reagan with a critical eye, as her parents do.
FIELDS | Yeah, her mom in particular, but it is her parents to a substantial degree. She’s been, more than anything, integrated into the family, especially the three-person family that Henry’s less a part of. A lot of her worldview comes from that, even given the differences between Philip and Elizabeth.

TVLINE | Your show has always been a slow burn, and maybe this season has been a slower burn than others…
WEISBERG | [Laughs] It isn’t even burning anymore! Just warm embers.

TVLINE | Some fans have complained about the lack of action this season. Is this just a case of: You knew you had two seasons to wrap things up, and you wanted to spend this season putting your chess pieces in place for the endgame?
FIELDS | I really don’t think that’s the case. For better or for worse, this is the way we wanted to tell this story this year. We wanted to focus more on these particular character dynamics. In Season 4, we had a lot of story pieces that had taken time to grow and were ready to be harvested. And that created a level of propulsion at certain points in the season. We knew we wanted this season to feel different as it unspooled, as we want all the seasons to feel. So this really wasn’t the case of us wanting to do set-up things as much as it was just the reality of: This is how the story wanted to be told this season.

WEISBERG | I think also, for all those fans or critics who are saying it’s so slow this season that they’re ready to blow their brains out… I don’t think we perceive it as slow as they do. For us, it’s just a different feeling about it. I’m not saying they’re wrong! Everybody feels the way they do about it. But our perception doesn’t quite sync up. We were not intending it to be molasses. 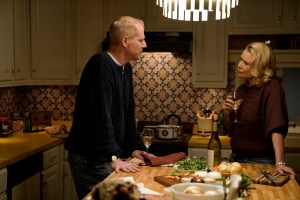 TVLINE | In the finale, we also saw Renee try to talk Stan into staying with the FBI. Is he starting to get suspicious of her? And will Laurie Holden be back next season?
WEISBERG | [Laughs] No comment on the latter. Nice try! But on the former, we don’t particularly think so. Stan would have no more reason to be suspicious of the woman he’s dating than he does the neighbors across the street.

TVLINE | I really liked the Elton John song you used in the finale… but it’s not an ’80s song. Was that one you had stashed in your back pocket for a big scene like that montage?
FIELDS | Our rule is: We just don’t use any songs that were released after the episode took place. But anything earlier is fair game. And we are both big Elton John fans, and we tried many times over the years to use Elton John. The problem is, the songs are so wonderful and powerful that they tended to take over any sequence. You sort of stopped watching the show and started listening to the genius that is Elton John and Bernie Taupin.

Then this sequence came along, and we were having trouble finding a song for it. We had something in there that was almost working, but not working, and we thought about using score. There was a day where we picked about ten songs to listen to, and Chris Long, our producing director, said they were down to five, but there were really only two to consider, and one he really loved. And as soon as we heard it, we knew this was the song.

TVLINE | Finally, the end of the series is coming up next season. Is the ending something you’ve had in mind from the beginning, or has it evolved over the past five seasons?
WEISBERG | It’s funny, because almost every idea we’ve ever had evolved, and evolved considerably. But in this case, the idea for the ending was, I think, something we came up with in Year 2 of the show… and we’re actually using it! At this point, I think it’s safe to say we’re using it. It could still change, but I don’t think it will. It was always an idea that had a couple of variations, and we toggled back and forth between the variations. But it’s still the same fundamental idea. It’s been a real surprise to us that it’s stuck this long.

Alright, comrades, it’s your turn: Grade the finale, and Season 5 of The Americans as a whole, in the polls below. Then hit the comments with your post-finale thoughts.