The CW’s Arrow hit the bull’s-eye with its Season 5 finale on Wednesday night, delivering its best closer in at least three years, possibly more. (Seasons 1 and 2 aren’t so fresh in my #PeakTV’d bean, sorry.)

Simply said, the hour was everything once expected and hoped for — a makeshift Team Arrow battling a battalion of baddie  — and more. For amid the assorted skirmishes, the superhero drama made time to carve out a plethora of character moments, giving people time to say the things that should and would be said in these dire circumstances, especially as lives were put on the line… and sometimes lost. 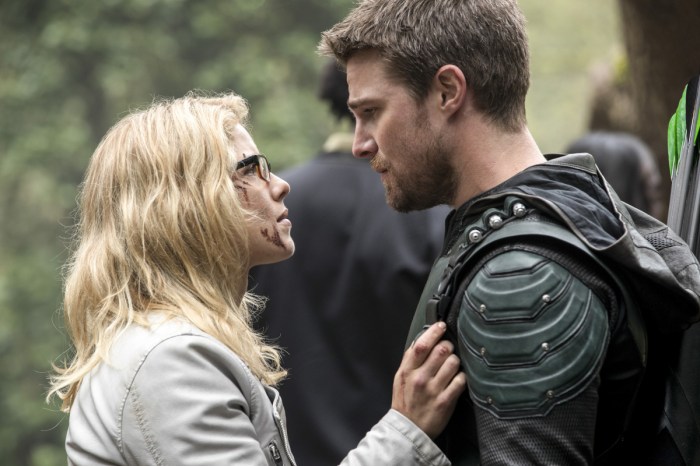 The fight coordination was also elevated for this action-heavy hour, helped along by direction that amped up the excitement and allowed each hero to shine by getting his/her licks in. And serving as a foundation for it all, some weighty performances by Stephen Amell, Willa Holland and Susanna Thompson (in a brief but tear-jerking cameo).

In the end, the finale all boiled down to Adrian Chase’s despicable agenda with regards to Oliver, first taunting him with the idea that young William had been killed, then later producing the rugrat in the name of forcing his adversary to make a Sophie’s Choice. That in turn triggered a final twist that was, to say the least, explosive.

In lieu of a formal recap, I was moved to instead revisit many of the big moments, those that elicited applause, awwwws, goosebumps and/or gasps. Review the attached gallery (click here for direct access) and then single out your favorite moments.