Chris Blue, I put my “Money on You” to take home the title. I also spent my money on him, downloading his insanely catchy original single off iTunes. But when the dust settled on Season 12 of The Voice, when we stopped commenting on how mumble-mouthed a singer Hunter Plake is, groaning before every Mark Isaiah performance, doing shots anytime it was mentioned that Quizz Swanigan is the youngest competitor ever, hoping that Lilli Passero would live up to her Blind Auditions potential, and wondering if it was possible for Carson Daly to appear less engaged and more disingenuous, did Team Alicia’s master showman win? Before we get to the results, let’s first review the performances that stretched what could have been a five-minute announcement into a two-hour wait.

Mark Isaiah with Luis Fonsi feat. Daddy Yankee, “Despacito” | OK, I still groaned before Mark went on, but he wasn’t half bad here. Maybe it just went to show what he might have been capable of if he’d had time to really prep — and had been really prepped — for every performance?

Jesse Larson with CeeLo Green, “Shining Star” | Often over the course of Season 12, Coach Adam said that Jesse sounded like a white CeeLo, and for better or worse, this Earth, Wind & Fire cover confirmed it. Side by side, Jesse paled by comparison. Also, CeeLo wore parts of a car wash. You just can’t compete with that.

Lauren Duski with Little Big Town, “Better Man” | Yeah, I was rooting for Chris, but a performance this gorgeous sure as shootin’ made the possibility of a Lauren win seem just as appealing. That said, what was up with that LBT singer’s sleeves? Did she think she had to compete with CeeLo’s car-wash chic? I’ve said it before: You can’t compete with that. 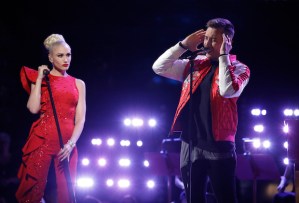 Hunter Plake with Gwen Stefani, “Don’t Speak” | Gwen might leave something to be desired as a coach, but her dramatic duet with Hunter on her No Doubt hit was lovely. Tell me again why Jesse is a finalist and Hunter isn’t? That howl of his — damn. And I even understood a bunch of the lyrics he sang here.

Zedd and Alessia Cara, “Stay” | I’d turn my chair for Zedd and Alessia, sure. But what I was most into during their performance was a set that reminded me of the Q*bert pyramid. This would’ve been more fun if they’d invited back for it Quizz. Or Felicia Temple. Somebody. Anybody.

Chris Blue with Usher, “Everybody Hurts” | Well, if this wasn’t a match made in heaven! The former Voice coach and Chris’ massive, emotional take on the R.E.M. heartbreaker was as close as I think we could possibly come to a Band-Aid for the soul.

Chris Stapleton, “Either Way” | Before this number, I was thinking, “C’mon, why didn’t they let Jesse sing this with him? Chris wrote Jesse’s single, for Pete’s sake.” But then Chris went on, and I totally understood. It was a kindness not to stack them up against one another. Chris’ intensity didn’t leave room on that stage for anybody else. Whoa. 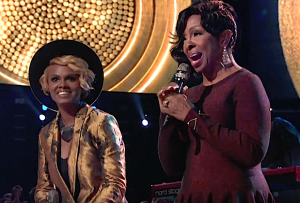 TSoul and Vanessa Ferguson with Gladys Knight, “You Are the Best Thing That Ever Happened to Me/If I Were Your Woman” | Wikipedia says that Gladys is 72. Looking at her, listening to her, this is not possible to believe. TSoul and Vanessa sounded fine here, but they were mere Pips next to the Motown legend.

Miley Cyrus, “Malibu” | After dedicating her performance to Ariana Grande and Manchester, the erstwhile Hannah Montana delivered an impressively spirited rendition of her new hit that made me think she’d have made a fine duet partner for Lauren.

Aliyah Moulden with Alessia Cara, “Scars to Your Beautiful” | Watching my second Alessia performance, I have to admire her sweatpant chic — she definitely reports to work comfy. But this performance was kind of a hot mess. Maybe it was sound issues, but it seemed like she and Aliyah were trying to outsing one another, with the result being that they generally sounded shouty.

Jennifer Hudson, “Remember Me” | The incoming coach, as she tends to, slayed. Moreover, she performed with a polish and a power that drew a very clear, very deep line in the sand between superstars like herself and wannabes who try out for — and even make it onto — The Voice without the goods to back up their ambitions.

And, at last, the results…

What did you think of The Voice’s Season 12 finale? Grade it in the poll below, then hit the comments.