It’s that time once again, rose aficionados: The Bachelorette is back… and Rachel has a whole lot of narrowing down to do.

One of the final contenders on Nick’s season, Rachel is now the first black Bachelor/ette in the franchise’s history, and on Monday’s season premiere, she got to choose from a highly diverse crop of 31 single guys. By “diverse,” I mean ethnically, but also maturity-wise… because some of these guys are straight-up clowns.

Let’s get right to the highlights:

THE PRE-TAPES | As usual, a few of the guys get to introduce themselves via pre-taped interviews, including: Kenny — sorry, that’s “The Pretty Boy Pit Bull Kenny King” — the wrestler with a daughter; Blake E. — yes, there are multiple Blakes — the sex-obsessed personal trainer (“Many women have told me about the amazingness of my penis”); and Diggy, the fashion plate who owns 575 (!) pairs of sneakers. But the lowlight is Lucas, henceforth to be known as the “Whaboom” Guy. As far as I can tell, this guy’s entire shtick is yelling the word “Whaboom!” at maximum volume like a frat boy on Red Bull. Sigh… we’re gonna be seeing a lot of this moron, aren’t we? 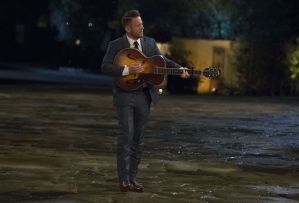 THE LIMOS | During the limo introductions, Rachel takes an early liking to a few of the guys. The first guy out, Peter, is handsome, and sports a gap in his front teeth — just like Rachel! Bryan the Colombian chiropractor impresses her by speaking a little Spanish. Kenny the wrestler does a fun breakdance arm wave with her. DeMario, one of the guys she met early on “After the Final Rose,” projects a confidence she likes, declaring himself “the number-one seed.” And Lee knows that strumming a bland song on an acoustic guitar is the way to every woman’s heart.

But of course, there are a few clowns who pull ridiculous stunts in order to soak up every millisecond of camera time. Matt shows up in a penguin suit: “I’m gonna waddle right into her heart!” (Ugh.) Brady smashes a huge hunk of ice with a sledgehammer, saying, “I just had to break the ice.” (Groan.) Jonathan, the self-described “Tickle Monster,” subjects poor Rachel to some nonconsensual tickling. (Ew.) And we’re forced to spend more time with Mr. Whaboom, who announces his arrival with a megaphone and comes out wearing a “Whaboom” tank top, complete with hashtag. What a fool.

THE COCKTAIL PARTY | Once all the guys are safely inside the house, Rachel offers a toast to “no regrets.” (A bit late for the guy in the penguin suit, don’t ya think?) Josiah the prosecutor steals her away to open up about his past as a juvenile delinquent. Fred has a past with Rachel: They went to the same school… and she was his camp counselor! Rachel remembers him as a bad boy, “and not in a sexy way.” But Bryan is definitely bringing the sexy: He grabs Rachel for some more Spanish-language seduction — and starts making out with her! She says she didn’t plan on kissing anyone on the first night… but she didn’t seem to hate it, either.

She does hate it, though, when Adam introduces her to his little friend: a creepy doll named Adam Junior. Are you surprised that Adam Junior gets his own confessional where he speaks in French? Then you’ve never watched The Bachelor before! Rachel is thoroughly creeped out by the doll, and rightfully so. Meanwhile, Blake E. calls out Lucas the Whaboom Guy, leading to this classic exchange — Lucas: “I feel that everyone has a little Whaboom in them.” Blake: “I have no Whaboom in me.” 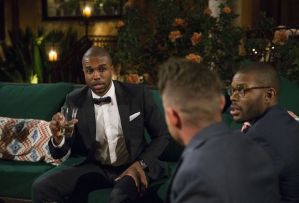 THE FIRST-IMPRESSION ROSE | DeMario and Josiah are both very confident about their chances; Josiah calls Rachel “my wife,” and DeMario is already inviting people to their wedding. But when it comes time for Rachel to hand out the first-impression rose, she passes over both of them in favor of… Bryan, the sexy Colombian chiropractor! Hey, sometimes forcing a kiss on a woman works out! After she pins the rose on his lapel, they make out some more, and a very drunk Mohit spots them, screaming out (hilariously): “No! Keep your mouth away!”

THE ROSE CEREMONY | Rachel has to cut quite a few dudes on the first night — good thing she has plenty of zeroes to choose from! She gives her first rose to gap-toothed Peter, which is a pretty good sign for him. A very confident DeMario gets one, along with Kenny and Josiah. Lee, Diggy and Blake E. stick around, too. She (inexplicably) keeps Jonathan the Tickle Monster, Matt the Penguin Suit Guy and Adam… but not Adam Junior. The final rose goes to… Lucas! He celebrates with (what else?) an extra-loud “Whaboom”! C’mon Rachel, I thought you were smarter than this! I’ll just chalk that one up to ABC executives wanting to stir up some drama. Otherwise, I would lose all respect for Rachel, and I don’t want to do that.

The season preview shows Lee turning into a straight-up villain, one guy’s ex accusing him of sleeping with her just a few weeks before (in front of Rachel!) and maybe a straight-up fistfight among the guys. Let the season begin! Whaaaa… nope, sorry, can’t do it.

Now it’s your turn: Give the Bachelorette premiere a grade in our poll, vote for who you think Rachel’s final pick will be — and then hit the comments for some lively post-show discussion.