She wasn’t sure about it at first… but now Rachel Lindsay is very happy she decided to become The Bachelorette.

After getting rejected by Nick last season, Rachel will be the one handing out the roses this time to 31 eligible men as the franchise’s first black Bachelor/ette. And she’s already revealed her season has a happy ending: Rachel says she’s engaged and “very much… in love” with one of this season’s contestants.

With Rachel’s season debuting on Monday (ABC, 9/8c), TVLine sat down with her to chat about the premiere’s craziest limo introductions, how “nervous” she was to sign on for another season, the “huge bromance” that broke out among the guys this season — and a few of her favorite celebrity crushes. (Hint: One is not who you might expect.)

TVLINE | There’s so much talk about this being a “historic” season, with you being the first black Bachelor or Bachelorette. But is there a part of you that’s like, “I’m not trying to be historic; I’m just trying to find love”?
Yeah! I’m just a girl, trying to find love… [Laughs] Look, I don’t want to shy away from the fact that I am the first black Bachelorette. It’s humbling. I’m honored just to be chosen, period, but also to represent myself as a black woman to America… it’s priceless. I wear it as a badge of honor. I was nervous to do it first, but now that I’m here and doing it, it’s amazing. But at the same time, yes, I still have to put that aside and focus on finding love, because that’s why I’m here. That’s what I want for myself. And I knew I wanted it more than ever after breaking up with Nick.

TVLINE | I heard you’re engaged; congratulations! So ABC found at least one great guy for you?
Thank you! Yeah, there were several, though. I had great men in my season. And you’ll see that as you follow along. It wasn’t easy for me. 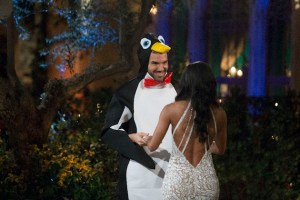 TVLINE | But there are always a few clowns in the mix, too, with those crazy limo introductions they do every season. Any standouts we should look out for in the premiere?
Well, in their defense, I definitely wanted to be entertained. I said that. I was like, “It’s the first night. Let’s start this off with a bang!” So you couldn’t be too crazy for me, because I asked for it. But there was definitely a guy who came out with a megaphone, all by himself out of the limo. There was a guy who came in with a marching band… that was a lot of fun. It was really impressive. I couldn’t stop dancing! There was a guy who came in with an EMS truck, there was a guy who tickled me… you will be entertained.

TVLINE | Do the guys get along with each other this season, or are there some fights when you’re not around?
It’s interesting, because on my season with Nick, we got along so well. The girls really did… and the same thing with this group of guys. There was a huge bromance! I would tease them about it all the time, like: “Who are you here for? Are you here for the right reasons? I didn’t realize it was going to be for the men in the house!” No, they really got along well. I mean, there were 31 men, so not everyone’s going to get along. But for the most part? Huge bromance. 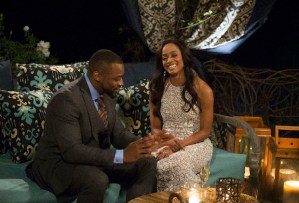 TVLINE | You’re an attorney. Did you find yourself almost taking a deposition with these guys, grilling them about their pasts?
Towards the end. [Laughs] When things started to get serious, I definitely put on my lawyer hat a little bit. But I’ve had relationships that failed because I never could turn it off. When I would come home, I was still a lawyer. So I’ve learned to not do that. I need to show the softer side of me, the vulnerable side, the sensitive side. Because I am all of that. And I sometimes struggle with it. But I really didn’t let that come out until the end, when I needed to be a little bit more logical. [Laughs]

TVLINE | Your dad is a federal judge, and kind of an intimidating guy, you’ve said. How does he feel about this whole reality-TV thing?
Obviously, this isn’t the way my parents would’ve gone about meeting each other. They’re still together. They’ve been married for 38 years. And they want me to have that, because they know how much I want it to. So although this might not be the way they would do it, they’re so supportive.

TVLINE | You were announced as the Bachelorette before you were even eliminated on Nick’s season. What was your reaction to the timing of that, and how did that go down behind the scenes?
For me, it was great. I didn’t have to keep it a secret anymore. I could just say, “Hey, here’s your new Bachelorette! She’s here, she’s black, let’s deal with it!” [Laughs] But I also enjoyed it because it allowed more men to apply, and they knew who was going to be the Bachelorette. So I really felt like I got men that were there for me. It allowed me to get my nerves out, too. I wasn’t rushed. I could take my time going through it. So I loved that I was announced early. I know not everyone was a fan, but… it worked for me.

TVLINE | You keep saying you were nervous before you signed on. Did you debate whether or not you actually wanted to do this?
Oh, a hundred percent. When I was first approached, I was like, “Me? No!” But as the talks went on, I was just so humbled that I was the one they wanted, that they felt that this would work for me, and I had another opportunity to find what it is that I want for myself. Of course I was nervous, because I’m doing it in such a public way, and typically I’m more private when it comes to my relationships. And I was going to be the first, so all eyes were on me. So I definitely had fears and doubts, and I had to weigh out the pros and cons. But the pros tremendously exceeded the cons. And I’m glad I did, because it worked! [Laughs]

TVLINE | We just had another Bachelor breakup last week, with Ben and Lauren. Does the show’s track record with relationships give you pause at all?
Honestly, it doesn’t. Because I know me, and I know my fiancé, and I’m going to get to know him better as time goes on. And we’re different. I’m not them. We don’t have the same relationship they do. So it’s so important to me not to get caught up in what happened to them. It’s absolutely unfortunate, and I hope that they find happiness. But for me, I just need to focus on what we have. 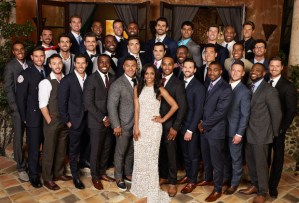 TVLINE | Give us an idea of what kind of guy you’re looking for. Who’s your celebrity crush?
I have a very wide range of men that I like. I like anywhere from a Justin Bieber — yes, I said Justin Bieber — to an Idris Elba to [WWE wrestler] Roman Reigns… I like a good smile, and it’s just what I connect with from within. But yes, those are some celebrity crushes that I have. And as you can see, none of them are alike. [Laughs]

TVLINE | The Bachelor franchise is still expanding: Now we have The Bachelor Winter Games on top of Bachelor in Paradise. Are we going to see you on any of these shows, or is this it for you?
I have no plans to be on any future shows. Right now, I am on cloud nine. I am so happy that I’ve found love and I’m engaged. I just want to work on cultivating that relationship that I have with my fiancé. And we’ll see where life takes us. Off-camera! [Laughs]

Who’s your early pick to win Rachel’s heart — and put a ring on her finger? Cast your vote in the comments.