Being a loving connoisseur of ’80s cheese, my heart leapt at the news that Fox was rebooting the old-school dating show Love Connection. But alas, some things are better left in the past. The new reboot — debuting this Thursday at 9/8c — turns out to be the TV equivalent of a hot-pink leotard stuffed full of floppy disks.

The original Love Connection, hosted by Chuck Woolery, is a charming relic of the video-dating era, with singles choosing a date from three options and reporting back to Woolery how it went. It’s corny and hopelessly dated… but that’s part of the fun. (Remember the chik-chik-chik-chik sound effect when the studio audience’s vote was tabulated?) Unfortunately, Fox’s new version has retained all the worst elements of the format, while making some truly hideous updates.

Here, the contestant dates all three prospects before reporting back to host Andy Cohen (the ringmaster of Bravo’s Real Housewives franchise) in front of a hooting studio audience. Each date recap plays out like the original, with the main contestant sitting next to Andy and their date chiming in via video chat. The new version does add a few modern tweaks, like the daters recording selfie confessionals after the date, but the too-talky format feels oddly sterile. Couldn’t they just film the dates and let us see what happened for ourselves? (This isn’t the ’80s anymore! You could film it on an iPhone!) 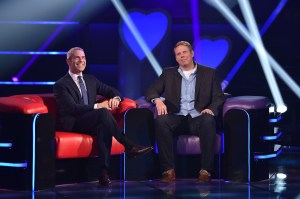 Before we get any further, I need to address the show’s set… because it’s remarkably awful. I don’t know why every TV game show set has to look like Who Wants to Be a Millionaire? — which debuted almost two decades ago! — but it’s an especially jarring fit for a dating show. Having Cohen and the daters seated in the center of a dark, dystopian room filled with giant video screens and dramatic lighting is about the least romantic setting I can imagine. There’s also an ominous, glowing-red drawbridge that reveals each dater’s final choice and looks like something out of the Death Star. This show is supposed to be all about love and romance… and they go and use the set from The Running Man.

Any faint glimmer of romance that’s left is extinguished by a rather crass twist: Before the main contestant picks their favorite among the three dates, the audience votes on who the best match for them is. If they pick the same person, the contestant wins $10,000. If they don’t, the contestant has to choose between the date they picked… and the cash. I thought we were trying to build relationships here! It’s a cynical ploy to inject some drama into the show, and it just ends up undermining all the talk of “love” and “connection” we hear from the daters. (If you’re wondering where all the crassness comes from, The Bachelor creator Mike Fleiss is one of the executive producers.)

Fleiss and the other EPs needed to make a choice: Either embrace the cheese of the ’80s original and keep it kitschy and old-fashioned, or bring it into the Tinder age with high-tech updates. Instead, the new Love Connection tries to awkwardly straddle both eras, and the result is a mess.

The only redeeming factor here is Cohen, who does an admirable job making all of this as fun as possible. After hosting dozens of Real Housewives reunions, he knows how to dig for dirt, and he strikes up a friendly rapport with each dater that encourages them to open up. He also tosses in a few bawdy observations of his own: When two daters start silently flirting, he exclaims, “You two are, like, banging each other with your eyes right now!” His enthusiastic hosting job lifts this entire show up a full letter grade, but it’s not enough to salvage it. If Love Connection were a real-life date, you’d be texting your friend to call you with a fake emergency before the entrees were served.

THE TVLINE BOTTOM LINE: Though Andy Cohen does a capable job as host, Fox’s Love Connection revival is hopelessly stale and deeply unromantic.