For the first time since the infamous Access Hollywood tape was released, Billy Bush is speaking out.

In a candid interview with The Hollywood Reporter, the former Today host broke his silence about the scandal that erupted in October when a tape emerged of then-candidate Donald Trump exchanging crude banter with Bush. “I was shocked and alarmed, and totally and completely gutted,” he says when he saw the tape right before it was leaked. “It was awful. And my participation was awful, too.” 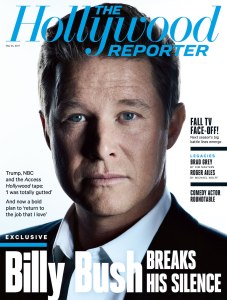 Bush blames himself for going along with Trump on the tape: “I was an insecure person, a bit of a pleaser, wanting celebrities to like me and fit in… I went way too far in my desire to keep this number one star happy.” He clearly regrets the way he handled it now: “I wish I had changed the topic… I didn’t have the strength of character to do it.”

Trump went on to win the presidency, of course, but the fallout from the tape cost Bush his job at NBC: “I will admit the irony is glaring,” he notes. He wanted a chance to go on the air and apologize (“I would have welcomed addressing the audience”), but instead, he was suspended and later cut loose from NBC. “It hurt a lot, and I fell apart,” Bush says of the firing.

Since then, he’s been laying low, attending a meditation retreat in Napa and a soul-searching seminar with spiritual guru Tony Robbins. But Bush now signals he’s ready to come back to TV — “I plan to return to the job that I love” — with THR reporting he’s developing a new show that involves pop culture, sports and interviews.

Is America ready to forgive Billy Bush, or should he stay out of the spotlight a while longer? Make your voice heard in the comments.