You think you know The Witness, and then 12 Monkeys completely turns everything on its head during Sunday’s Season 3 finale. 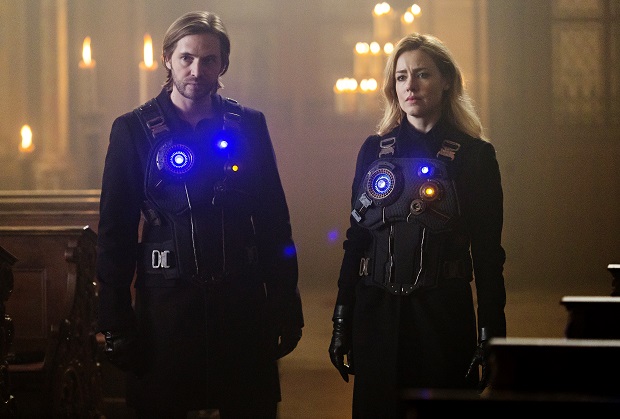 After reuniting with their son Athan (perfectly played by Battlestar Galactica alum James Callis), Cassie and Cole splinter with him to their home, circa 1959. Athan laments that he’s being “chased through time by sentimentalists.” When he gets a little too close to the splinter vest, Cole instructs, “Sit down, you little s—t.” (Were you expecting hugs and kisses?) Cassie tries to reason with the child that nothing is written and he can still be good. “Whoever you are today is not who you have to be tomorrow,” she says.

But the loss of his love Eliza has sent Athan down a path so dark, he threatens to kills his own parents. He also begs his father to shoot him, but Cole doesn’t have the heart to do it. Not long after, Jones, Hannah and her fighters show up — Olivia gave them the where and when details — leading to a shoot-up stand-off. Cassie and Cole give Athan the vest and tell him to go somewhere safe, but then Jones shoots him, (presumably) killing The Witness. Too bad for her it didn’t work, and time didn’t reset itself.

The face-off is interrupted by another arrival: Titan. Deacon and Cassie’s ally inside The Army of the 12 Monkeys, Mallick, is surprisingly pleased to learn that The Witness is dead. He then instructs his men to take Cassie, Cole and Jones away before burning down their love shack. Inside Titan, the trio discover the Pallid Man… and Olivia standing behind him as he collapses. All this time, she has been playing a long con, using Cassie, Cole and the others to find and defeat The Witness, who disappointed her with his failures. If you want something done right, you gotta do it yourself, she figures. (She also knocked out Deacon to get here.)

Meanwhile, a shot Athan splinters — you didn’t really think he was dead, did you? — to London 2017, where Jennifer is waiting for him and eventually nurses him back to health. Turns out he was the dying man in her visions. When he gets well enough and fixes the vest, he returns to Titan for Cassie and Cole. But first, he gives Jennifer a parting message: “How does one stop what never began? I think you’re the answer, Jennifer… You are not like me. You are better,” he says, echoing her words to him when he was a child. “Whatever these are, these symbols, this is your mission now.”

Back in Titan, Athan redeems himself by staving off Olivia and her followers with a spree of bullets, allowing Cole, Cassie and an injured Jones to get back to 2047. Before they splinter, Cassie creates a paradox with the two timepieces, wiping out Mallick — but there’s nothing she can do save her son at this point.

Here’s the truth: Athan informs Olivia that she has always been the deceiver. She points out that she hasn’t given any orders through time, but Athan assures her she will. She is the “sad, lonely demon at the end of time.” So she slits his throat, then takes her place as The Witness, vowing to create what Athan could not and to defeat the army’s enemies.

“They’re coming for us,” Cole declares back in 2047 as Titan splinters. Yes, it’s the beginning of the end for humanity — but it’s not end of the episode! In a coda, we see Cole’s father reading to him as a young boy. A piece of paper falls out of the book, with the story of the serpent scribbled on it. Cole wonders what it means. His dad replies that he doesn’t know, because Cole’s mother wrote it. Does this mean she was primary?!

12 Monkeys fans, what did you think of the twisty season ender? Grade it, and the entire season, via the polls below, then hit the comments to back up your pick!