… And Drunk Uncle and Jacob the Bar Mitzvah Boy lived happily ever after.

This weekend, Saturday Night Live not only wrapped its highest-rated season in 20-plus years, but it also said goodbye to veteran repertory players Bobby Moynihan and Vanessa Bayer. What’s more, Baywatch star Dwayne “The Rock” Johnson was inducted into the Five Timers’ Club — and chose Tom Hanks as his 2020 presidential running mate. 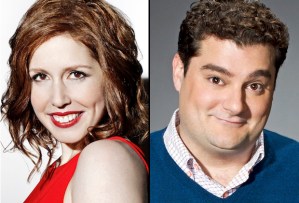 The big announcement came following a rather peculiar cold open, as the late-night series parodied itself by having Alec Baldwin’s President Donald Trump and Scarlett Johansson’s Ivanka sing “Hallelujah,” just as Kate McKinnon’s Hillary Clinton did after last November’s election. (Watch it here.)

Unlike, say, Kristen Wiig, neither Bayer nor Moynihan got a fancy end-of-show farewell, but were on hand for some of the finale’s funniest moments. Among the highlights…

WEEKEND UPDATE
Jacob the Bar Mitzvah Boy was inexplicably MIA. Instead, Bayer’s final turn on Update was as mumbling meteorologist Dawn Lazarus. Moynihan, however, did not disappoint, putting in one final appearance as Trump supporter Drunk Uncle, who vowed to “Make America Drunk Again.” (The only way this could’ve been better was if Drunk Uncle had been introduced to Hanks’ Black Jeopardy contestant, but we’ll save that for our fan-fiction.)

CARTIER
In perhaps the funniest commercial since the Ivanka perfume ad, Bayer portrayed an anxious, dimwitted partygoer whose boyfriend managed to distract her by gifting her a diamond-encrusted fidget spinner.

WWE PROMO SHOOT
The Rock reprised his role as Koko WatchOut, whose insults hurled towards Trashyard Mutt (Moynihan) once again hit far too low beneath the belt. In just under five minutes, he had hilariously reduced his competitor to tears, taking aim at his weight, fertility and crumbling marriage.

RAP SONG
Hanks returned as David S. Pumpkins (or rather, David S. Pimpkins) in this can’t-miss short. The pre-taped bit featured pretty much the entire cast (as well as musical guest Katy Perry) playing an uncanny number of rappers, all taking part on one track. Unclear why Moynihan played “Skiffle,” though, when they could have just as easily had him play Riblet.

What were your favorite sketches of the night? And what missed the mark? Grade the Season 42 finale via our poll, then hit the comments and make your picks.