Warning: The following contains spoilers for Friday’s episodes of 12 Monkeys.

12 Monkeys closed out the first night of its Season 3 binge-a-thon on Friday with three big moments: a resurrection of sorts, a major death and a long-awaited reunion.

After learning from Olivia that The Witness is Cole and Cassie’s son, Ramse sets out to kill Cassie in the past. But Cole is wise to his scheme and kills his “brother”/best friend to protect the woman he loves.

The evening’s final episode also reveals that Deacon is still alive in Titan, thanks to a mysteriously benevolent follower of The Army of the 12 Monkeys. Once let free, Deacon helps Cassie escape her captors, and they return to 2046, where she reunites with Cole. Her simple, discreet nod of the head confirms Cole’s suspicions — their child is The Witness.

Below, executive producer Terry Matalas shares what’s next for Deacon, whether we’ll see Ramse again, and how Cassie and Cole move on from that shocking revelation. Plus: Get the story behind Jennifer’s crazy musical moment in the season premiere. 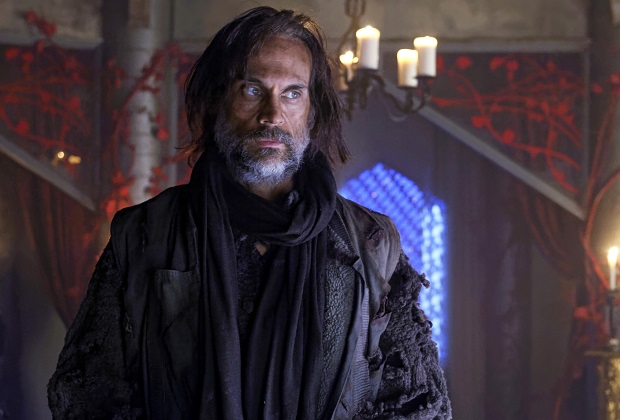 TVLINE | It seemed like Deacon had sacrificed himself at the end of Season 2. Why did you decide to bring the character back?
Well, it wasn’t a decision to bring him back. We knew what we were going to do with him. In fact, we had actually shot a scene at the end of last year’s finale in which you see his body being dragged away as his eyes open, but we felt like it was stronger to just not know what happened to him. To discover him in the same place as Cassie, we thought, was pretty exciting.

TVLINE | It’s a big turning point in his character. He’s made some moves here that are very noble.
Yeah. He does have some noble [in him]. He’s also driven by how he feels for Cassie.

TVLINE | And Jennifer, too.
Especially Jennifer. But he is also — just to tease where we’re going with him — at a loss [about] his own purpose. He’s not quite sure how he fits into all of this, and that will affect his motivations as we carry on.

TVLINE | Ramse has had a lot of close calls in the past. Is this a real death as far as this show goes?
Ramse’s dead.

TVLINE | That was a big moment for Cole, killing his “brother.” How does that decision weigh on him?
As heavily as you could possibly imagine. He is not a well puppy at the end of all this, especially when he learns, “Wow, Ramse was right about it all.” He’s, for sure, pretty f–ked up.

TVLINE | Is the relationship between Cassie and Cole any different once they’re reunited, given everything they’ve been through?
Absolutely. Certainly, the innocence of new love is gone. Now there are consequences to that love that they have to grapple with. It’s really heavy when you find out your kid might have destroyed the universe. So it’ll be interesting to see how it plays out.

TVLINE | Has she forgiven him for erasing their time in the house and lying to her about it?
She definitely addresses that in future episodes.

TVLINE | Going back to the season premiere, the scene with Jennifer singing “99 Luftballons” was fantastic. Where did that come from?
Thank you. In the writers’ room, I had pitched a scene. I knew she was going to have this musical number about “99 Luftballons” as this [German officer] was executing the POWs [and] hearing the German would put her in this place… Then one of our writers, Chris Monfette, had basically written some pages where you actually saw it as a fantasy sequence, and he was like, “This might be too crazy, but I want you to take a look at it.” So I put it in the script. Then I ended up shooting it like a Katy Perry video. [I thought], “This is the first time we’re going to really get into her head. Let’s go for it. It’s either brilliant or horrible. I don’t know. It’s going to be one of the two.” And then even up to that last moment when it was cut together and my editor, Andrew Nichols, was, “You’ve got to see this,” I wasn’t really sold. I was still a bit nervous that I had gone too far, and they were going to put me in director jail forever, but the studio and the network loved it.

Rewatch the musical moment below, then scroll down to grade the first four episodes of 12 Monkeys Season 3.