Warning: The following recap contains major spoilers from the Season 4 finale of The Blacklist.

Ever since Raymond Reddington walked into FBI headquarters four years ago, requesting to speak only with Elizabeth Keen, there’s been a flurry of theories about Red’s relationship to the profiler. Is he Liz’s father? Is he, somehow, her mother? Is there another explanation, beyond blood relation, that justifies Red’s loving-yet-creepy fascination with her?

But if, throughout the years, you’ve remained a staunch advocate of the most plausible theory on that list — that Red is indeed Liz’s dad — then Thursday’s season finale of The Blacklist must have left you feeling mighty vindicated.

After Harold Cooper swiped some of Red’s DNA from a years-old evidence file, he had it tested in order to determine, once and for all, the reason why Red came into Liz’s life so unceremoniously. And the results confirmed what many of you had long suspected, what Red kinda-sorta confided to Alexander Kirk just months ago: He is Liz’s father, after all.

And yet, this reveal — long-awaited though it may have been — was far from the finale’s most shocking moment. Let’s break down five other major events from Thursday’s season ender:

5 | After having his bank accounts cleared out and most of his international business ties cut against his will, Red doubles down on his efforts to track down Mr. Kaplan, the woman behind this systematic dismantling of his empire. Given that Thursday’s finale was two hours, I trust you’ll forgive me for giving the Reader’s Digest version of the proceedings: In short, Kaplan is working with investigator Julian Gale to (a) take down Red and (b) prove that the FBI task force has been working with him this entire time, turning a blind eye to the murders that Red committed while informing the FBI of new blacklisters. 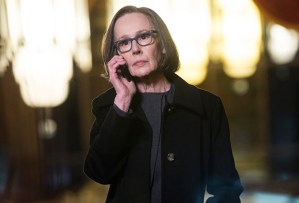 Although Kaplan comes thisclose to getting Gale the smoking gun he needs to indict the task force — that is, Red’s signed immunity agreement with the Department of Justice — Red ultimately intercepts the document, ensuring it doesn’t get into Gale’s hands. Kaplan, seemingly anticipating this snafu, quickly moves on to Plan B: She’ll go directly to the prosecutors and tell them everything she knows about Red and the task force, in exchange for immunity.

But once again, Kaplan and Gale’s plan is thwarted by Red. While Kaplan is attempting to obliterate her onetime colleague, Red is using his precious remaining time to track down Henry Prescott, a renowned “fixer” who helped Laurel Hitchin dispose of Reven Wright’s body back when she murdered the woman. Once Red and Ressler locate Prescott (and have him prove that Reven’s body is, indeed, floating in a barrel of formaldehyde in a storage facility), Red uses this information to blackmail Laurel, in exchange for her immediate shutdown of any investigation into Red and the task force.

4 | When all is said and done, Kaplan isn’t able to take down Red in quite the way she had hoped, and just before she can make her escape, Kaplan finds herself cornered on a bridge, surrounded by Red, Dembe, Liz and a dozen police officers. But she does have one more thing to use against Red: a mysterious suitcase that she dug up from a location called Tanzi Farms earlier in the episode. Though we’re not immediately told what’s inside, it seems to contain a major secret that Kaplan and Red have kept all these years — perhaps the worst secret they’ve been keeping from Liz all this time.

Under the impression that Red is about to kill her, Kaplan urges Red to give Liz the suitcase and finally tell her the whole truth at last. But Red assures Kaplan that he doesn’t intend to hurt her — and when Red won’t kill her, Kaplan takes her own life, jumping off the bridge and diving into the water below. (Given what happened the last time Kaplan “died” on this show, I’m not entirely convinced she won’t pop up again next season — but if she is gone, The Blacklist tragically just lost its most badass character. You’ll be missed, Kate!)

3 | When Aram is suspiciously the only FBI agent to get subpoenaed for testimony about the task force, Samar immediately becomes wary of Aram’s girlfriend, Janet — and her suspicions turn out to be valid. Too tempted by the prospect of an expunged criminal record, Janet gave Aram up to the authorities — and when Aram finds out what she did, after the investigation is shut down, he (presumably) breaks things off with Janet and returns to the bureau, where he finally kisses Samar.

2 | Once Laurel Hitchin makes good on her part of the bargain, and stops the investigation into Red’s task force, she brings Ressler back to her house in order to return his badge. But the conversation with Laurel quickly turns hostile, and she informs Ressler that he’ll be doing her bidding for the foreseeable future, as payment for her “good” deed.

The agent refuses to agree to those terms — and as Laurel begins to violently move toward Ressler, he pushes her back, sending her crashing into furniture that knocks her in the head. Within seconds, Laurel bleeds out all over the cushy white carpet… and just like that, Ressler’s recent introduction to fixer Henry Prescott has become very handy. 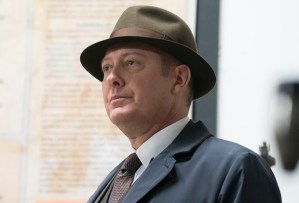 1 | As the finale comes to a close, Cooper presents Liz with an envelope, which contains the DNA test results that will confirm whether Liz is Red’s daughter. Liz admits to her boss that she’d actually swiped Red’s DNA off a scotch glass two weeks after they met — but when the test results came in, she was too afraid to look at them.

This time, though, Liz overcomes her nerves just long enough to open the envelope and peek at the sheet of paper inside, which informs her — at long last — that Red is her father. Her next move: tracking Red down at his motel and admitting how angry she is that he kept this from her… before tearfully accepting that she and Red are a family and pulling her dad into a tight hug. (Meanwhile, my current feelings are at the intersection of Aww! and About Damn Time!)

But, as Dembe ominously reminds Red, Liz is still very much in the dark about that suitcase Kaplan dug up from the farm. “I’m not sure Elizabeth will ever be ready to learn what you did to Katarina,” Dembe warns his boss, just as they arrive at Tanzi Farms to discover the suitcase is, in fact, gone.

So, who has it? Why, it’s Tom! (Welcome back, sir! Sorry about what happened!)

While speaking on the phone with someone we don’t meet — (“Hey. I got it. Mr. Kaplan’s instructions were very specific. I’m on my way.”) — Tom retrieves the suitcase from an innocuous-looking locker where Kaplan stashed it shortly before her demise. And although Liz presumably won’t know the suitcase’s contents for a long time to come, we’re made aware of what’s inside: skeletal human remains.

With that, I turn it over to you. What did you think of The Blacklist‘s super-sized finale? Grade the episode in our poll below, then hit the comments with all of your thoughts.