ABC’s Designated Survivor wrapped its schizophrenic Season 1 run on Wednesday night by giving the good guys something that had thus far eluded them: a big win.

But first, Hannah had to make lemonade out of the van full of lemons she was handed upon waking up from her drugging, seeing as the FBI had been tipped to her “plan” to trigger the explosives in the Bureau’s parking garage. With little time to talk sense into those aiming guns at her, she closed herself inside the volatile van and sped it out of the building, down the street and into the drink, tumbling out the driver’s side door just before it exploded in the Potamac’s basin outside the Jefferson Memorial (Google Maps tells me). Forstell then arrived on the scene to assure everyone that Wells was not a conspirator.

After looping in President Kirkman on the latest, everyone agreed that rather than take it slow as with MacLeish, they should go all in and storm Patrick Lloyd’s home — which they did, only to find him vanished via an underground tunnel. Afterward, they learned that Lozano (whose face surely had been everywhere as a would-be presidential assassin!) had sneaked into the Pentagon with surprising ease. Hannah raced to the scene too late, yet conveniently managed to spy Lozano in his car going the other direction. That led to a chase followed by fierce tussle inside a construction site, where Lozano wound up falling onto the business end of some rebar, as many a TV character does.

Hannah would catch a break, though, when Chuck alerted her to the many unread emails in her mailbox, including one from Jason Atwood. Sure enough, it contained was the audio and photos of Homeland Security Advisor Jay Whitaker meeting with Lloyd, which he acquired and uploaded before getting snuffed. Moments later, Agent Ritter and Hannah stopped Whitaker in his tracks there inside the White House, though we didn’t get to see him squirm or hem-and-haw under interrogation.

Even so, it was 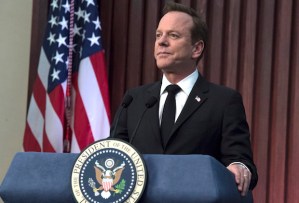 a big win for the investigation into the conspiracy, allowing Tom to speak to a joint Congress and announce to the country that esteemed reporter Abe Leonard was right — Al-Sakar was not behind the Capitol bombing. Instead, it was a group of domestic terrorists led by Patrick Lloyd.

Alas, no sooner has Tom delivered his rousing, “Yea, America!” speech, which was met with thunderous applause (and preceded by warm hugs from his returned kids), he is summoned to the Situation Room to learn that during his infiltration of the Pentagon, Lozano executed a hack that transmitted allllll kinds of sensitive military intelligence to Lloyd, who was now in the wind and possessing the resources to stay off the grid. To which highest bidders might he sell it to?

WHAT’S NEW FOR SEASON 2? | Speaking at ABC’s Upfronts presentation this week, Dez star Kiefer Sutherland seemed to allude to the freshman drama’s wobbly narrative start (which wasn’t helped by a parade of showrunners or a long midseason hiatus), saying, “The first season of any show requires laying out a great deal of groundwork for the potential stories to follow, and I couldn’t be more pleased with how we ended this season.”

Sutherland then looked ahead to Season 2, saying that Dez is adding “no less than three principal characters to round out the complexities of running the White House [and] allow us to delve more deeply into the lives of our main characters.” He even went so far as to promise “a midseason event that I believe will knock the socks off our audience.”

Any guesses on what that could possibly be, on a show that has already blown up the Capitol, hacked the White House and put a bullet in POTUS?