Warning: The following recap contains major spoilers for the Season 2 finale of Blindspot.

It is a very, very good thing that Blindspot fans were made aware of the show’s fate long before Wednesday’s season finale — and even better, of course, that the NBC drama scored a third season.

Because, had the series ended like that — after a two-year time jump, with Jane living among mountain monks and totally removed from her life with the FBI — I’m not sure viewers could have coped with such a massively intriguing (but also sorta strange) cliffhanger.

Before we break down the mind-boggling closing minutes of Wednesday’s episode, let’s revisit the finale’s other major moments:

A (SAND)STORM IS BREWING | After being forced into that spooky bunker with the COGS, where last week’s installment ended, Weller and CIA Deputy Director Keaton quickly realize that Sandstorm’s attack on the United States is far from over. In fact, something massive is going to happen that day: Shepherd will attempt to annihilate the current administration, leaving only Weller, Keaton and the rest of the COGS to rise up as the new U.S. government.

Weller manages to tip Patterson off about the continuation of Phase Two, and after a remarkably fast brainstorm sesh, the rest of the FBI team pieces together Shepherd’s plan to take down the country’s political structure. The bottom line: “Phase Two” is just a fancy term for “bombing Washington, D.C.,” where all of the nation’s leaders will be gathered later that day.

Because this is Blindspot‘s season finale — and because Patterson is an actual genius — it should come as no surprise that the FBI team does eventually thwart Shepherd’s plan to bomb the nation’s capital. (Yay!) 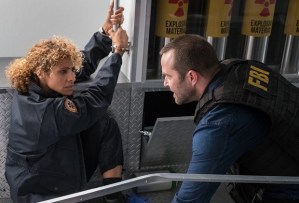 But the successful dismantling of Sandstorm isn’t without incident: Jane and Roman both get injured in a head-on ambulance-vs.-police-car collision — and after the siblings tussle in the middle of the road, Jane seems poised to shoot her brother at his urging, before ultimately lowering her gun and letting him run off to who-knows-where. Shepherd gets shocked (twice!) with a defibrillator in order for Weller to stop the glide bomb that’s careening toward Earth (and, after getting captured by the FBI, she’s tortured and interrogated by Nas). As for Weller himself, the aforementioned car crash sends a knife right through the agent’s leg — and when he’s woozy and delirious from the injury moments later, he tells Jane he loves her.

IT’S A LOVE STORY, BABY | Despite Weller’s roadside confession, a romance between him and Jane isn’t a foregone conclusion throughout the hour. On the contrary, after FBI Director Hearst tells Jane that she can go anywhere she wants after the Sandstorm takedown is wrapped up, Jane toys with the idea of going to California when all is said and done. Of course, she doesn’t really want to — but when she floats to Weller the idea of leaving the FBI behind, Weller tells her, “It’s not fair to keep you here,” rather than urging her to stay.

It isn’t until much later, after Weller admits to Jane that he loves her, that Jane decides to stay at the bureau. Upon arriving at a dinner party with her colleagues, to celebrate the Eastern seaboard not being blown to bits, Jane pulls Weller aside and tells him she’s staying put at the FBI — and she loves him, too. (This is where he interrupts her with a kiss, and they move to the bedroom for some slightly more R-rated confessions of love.) (Also, side note: Upon seeing Jane and Weller taking off each other’s clothes, was anyone else’s first thought, “Poor Jaimie Alexander — she had to get all the tattoos put on this time!”?)

AIN’T NO MOUNTAIN HIGH ENOUGH | But if you thought Blindspot was wrapping things up nice and tidy for the summer, you were very, very wrong. On the heels of Jane and Weller’s first night together, the episode jumps forward by two years, where we catch up with Jane… climbing the side of a mountain without any harness, equipment or, well, anything. (And with her hair grown out!)

So, when Jaimie Alexander hinted at a “chunk of missing time” that would come to light at the end of the hour? She wasn’t talking about a flashback, but a flash forward. And we learn a lot in the episode’s final minutes:

* Jane is now living with a group of monks in the mountains — and for reasons unknown, she says she can never return home.

* Jane and Weller are married… or were, at some point. When Weller arrives in Jane’s tent that night, much to her surprise, Jane’s first observation is that he’s still wearing his wedding ring. Are they divorced? Did she disappear without warning? Did he think she was dead for a period of time, but refused to take off the band? (Please don’t let it be Option C, Martin Gero. My heart couldn’t take it.)

* Patterson, Reade and Zapata have gone missing, and their presumed kidnapper left behind a metal box with Jane’s name on it. Thus far, no one’s been able to unlock it, but when Jane and Weller both clutch the box at the same time, it opens to reveal a curved piece of metal displaying the same bird that’s inked on Jane’s neck. We’re left with this visual: Weller holding the metal up against Jane’s corresponding tattoo, which sends a purple glow across Jane’s body, lighting up all of her tattoos along the way. (Jane’s initial reaction is the same as yours, presumably: “What is happening?”)

OK, your turn, Blindspot fans! What did you think of Wednesday’s sophomore finale? Could you have coped if this were the series finale? Grade the episode in our poll below, then hit the comments with all of your thoughts.