Nearly every member of the Chicago Fire crew found themselves in harm’s way in Tuesday’s Season 5 finale, which closed out with most of Firehouse 51 trapped in an inferno.

If you’re keeping count, Boden, Cruz, Dawson, Brett, Tony and Capp are the only folks not inside the burning building. Otis and Kidd are pinned down in the factory fire, while Severide and Kannell are blocked. Meanwhile, Herrmann is inside with Mouch — who earlier announced that this would be his last shift before retiring — when the 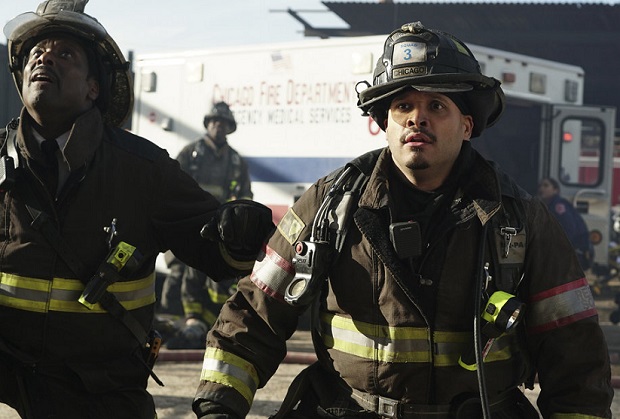 latter collapses from a possible heart attack. Outside, a tearful Cruz apologizes via radio for freezing Mouch out and begs him not to die, but it’s definitely not looking good for the firefighter.

But the most emotional goodbye comes from a trapped Casey to his wife on the outside. He takes off his mask so she can hear his voice and then pours his heart out: “Gabby, you know how much you mean to me, right? You’re the best thing that’s ever happened to me. Gabby, I want you to remember us happy, together, holding each other. You’re my miracle, Gabby. You’re my miracle. I love you.”

Earlier in the episode, Casey wasn’t feeling so lovey-dovey towards his other half, telling her in no uncertain terms that he’s not happy with her father Ramon’s indefinite stay. Gabby, meanwhile, accuses Casey of being selfish by spending the night at Severide’s rather than talking out their problems. She later confides to Brett that it’s difficult to see the man who’s been the rock of the family crumbling right in front of her. Brett urges her to tell that to Casey the next chance she gets… but she never does get the opportunity.

* Realizing that his alderman position is starting to affect his personal life and his firefighter job, Casey steps down and nominates Tamara to replace him.

* Boden informs Severide that it’s up to him to decide who goes into the rescue squad floater pool. Despite his end-of-episode mea culpa, I’m thinking it’s still not looking good for petulant Cruz, who more than once brushed off a concerned Severide.

* “How long is he staying?” “Ask my wife. Because I can’t.” That was a nice Casey/Severide bro moment.

Fire fans, what did you think of the season ender? Who do you suspect won’t make it out alive come fall? Grade the episode via the poll below, then hit the comments to back up your pick!