Honest question: Did anybody tune in to Monday’s semifinals of The Voice Season 12 not knowing for sure which singer would be getting their vote? I know when I sat down to recap it up, I was decidedly behind Chris Blue. Even if he had the offest of off nights and gave the worst performance of his run on the show, he was still going to get my support, because by that point, I had been more than satisfactorily dazzled. So it got me to wondering how many of the rest of you had also already chosen “your” contestant. And what would another competitor have to do to entice you over to their side? Was it even possible? Did any of them pull it off? Read on, and we’ll go over the performances, then hit the comments to discuss.

Hunter Plake (Team Gwen), “With or Without You” — Grade: C+ | As his coach noted in rehearsal, Hunter has become known for flipping songs. But rather than play to that artistic strength, he stuck pretty close to U2’s original rendition of the ’80s classic, which oddly drew attention to a few missteps (dubious timing, a bum note here and there) and gave him too few chances to soar in the fashion to which we’ve become accustomed. Snoozeville.

Chris Blue (Team Alicia) and Vanessa Ferguson (Team Alicia), “If I Ain’t Got You” — Grades: B+ (Chris), A+ (Vanessa) | Sweet Jiminy Cricket, these two absolutely slayed their coach’s song! Vanessa not only sounded smooth as silk, she might have actually done what I’d have sworn was impossible and outshone Chris. Make no mistake — he was still terrific. But I’ll be damned if this wasn’t Vanessa’s best performance yet on the show!

TSoul (Team Blake), “Ain’t No Way” — Grade: A- | Tackling a female song for the first time — and one by Aretha Franklin, no less! — TSoul displayed stunning vulnerability, getting so caught up in the number that it was easy to get lost in the moment right along with him. He stumbled a little toward the end, but only a little, and had regained his vocal footing in time to nail his falsetto notes and finish strong.

Brennley Brown (Team Gwen), “Suds in the Bucket” — Grade: B+ | Bopping away from the ballads to show another side of herself, the 15-year-old proved that she for sure could handle an upbeat toe-tapper, just not quite as well as she could a tearjerker. She still dazzled on the big notes — there’s no stopping that voice — but seemed to struggle at times with the quirkier bits. Girl just needs to learn to have fun! 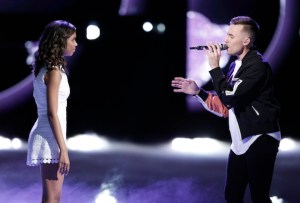 Aliyah Moulden (Team Blake) and Hunter Plake (Team Gwen), “Let It Go” — Grades: B+ (Aliyah), B (Hunter) | When Carson Daly announced that these two had been paired for a duet, I thought, “Train wreck coming down the pike.” They just seemed too stylistically different to work well together. And they were too different. The number didn’t gel, and neither did their harmonies. On the plus side, at least they both sounded pretty good individually, in particular Aliyah, who not only sang beautifully, she enunciated the lyrics.

Lauren Duski (Team Blake), “Ghost in This House” — Grade: B | In rehearsals, Lauren was sounding tremendous on this Shenandoah heartbreaker. But on stage, she actually came off a little unsure. Part of that might have been the sadness of the song, the emotion. But part of it — and this really surprised me, coming from her, since she’s usually pitch perfect — seemed to be actual iffy notes. Guess she’s human after all? Helluva singer, but human.

TSoul (Team Blake) and Jesse Larson (Team Adam), “I Wish” — Grades: A- (TSoul), A- (Jesse) | Unlike Aliyah and Hunter, the pairing of TSoul and Jesse made sense not only on paper but on stage. Their voices complimented one another’s nicely, and though neither of them have moves to rival Chris’, they both looked like they were having a good time. Also worth noting: Jesse seemed more comfortable on this Stevie Wonder cover than he did on The Time’s “Jungle Love.” No complaints.

Chris Blue (Team Alicia), “Take Me to the King” — Grade: A | At this point, I’m running out of superlatives to throw in Chris’ direction. This performance found him going from an almost inaudible whisper to a roar so thunderous, it could have shaken the angels out of heaven. You could tell he was feeling it, too — afterwards, he was so electrified, he had to walk off some of that energy before he could stand still and hear his coach’s reaction.

Vanessa Ferguson (Team Alicia), “Superstar” — Grade: B+ | Exchanging her trademark hat for an evening gown, Vanessa put her own spin on The Carpenters’ classic… to mixed results. When she was able to turn up the volume and really belt, she sounded amazing. But until she got to that point in the song, the dramatic arrangement was the big sell, not her vocals, which is a shame, seeing as her duet with Chris was such a triumph.

Lauren Duski (Team Blake) and Brennley Brown (Team Gwen), “Good-Hearted Woman” — Grades: A (Lauren), A (Brennley) | Huh — this spunky performance by Brennley was everything that I wanted from her on “Suds in the Bucket.” She owned this. As for Lauren, she looked and sounded so at home on this number, you’d have sworn she’d been playing the Grand Ole Opry for decades. And I know it seems like I’m giving out good grades right and left, but by the time we get to the semifinals, we should be getting more great performances than so-so, right?

Jesse Larson (Team Adam), “I Was Wrong” — Grade: A | I think we might have just witnessed an exorcism, because sure as hell, Jesse sang like a man possessed. Oftentimes over the course of this season, I’ve been bewildered by the Jesse love. He’s a good singer and seems like the swellest of guys. But was he all that? “Eh,” I thought. Well, with this number, I finally got it. This was absolutely smokin’!

Aliyah Moulden (Team Blake), “I Can Only Imagine” — Grade: B- | If nothing else, this kid oughta have an amazing future doing the singing for animated Disney heroines; her voice is clear as a Belle. Here, as enormous as her voice is, she seemed to be fighting to be heard over the band and her backup choir. Not a bad performance, but not the sorta showstopper that could compare to Chris’ work on “Take Me to the King” or Vanessa’s on “If I Ain’t Got You.”

So, did anyone steal your vote away from your previous favorite? If so, who? And, of course, who did you think gave the night’s best performance? Vote in the polls below, then hit the comments.