In the NCIS: Los Angeles Season 8 finale, Sam Hanna (two words) split off from the team to go rogue and hunt down Tahir Khaled, the Sudanese war criminal who in a vengeful fit had kidnapped Michelle, setting the stage for her eventual death.

Sam has already held his wife’s dead body, but Tahir doesn’t know that. Ergo, he is trying to track down Sam, to arrange a face-off and taunt him further. When Tahir gets hold of the NCIS team, some whirlwind wizardry from Nell allows Sam’s voice to talk to his nemesis, and agree to a meet.

Callen & Co. then go about finding Sam, who has already given Sabatino the slip. When they do, Callen convinces Sam to let them back him up during the face-to-face. Sam waits at the agreed-on location, only to have a shuttle van eventually pull up and invite him inside. He finds Tahir in the back row, warning that any attempt at heroics will prompt his “colleagues” scattered throughout the shuttle to start killing passengers. Sam plays along, cuffed to Tahir, until Deeks arranges an ersatz road block. That lets Kensi drop the complicity driver, and then the team storms the van to take down the shooters. Sam meanwhile wrestles with Tahir, who’s clutching onto a bomb trigger. Callen shoots off the handcuffs, allowing Sam to jump out the back, as Callen also does, just before the van goes boom. 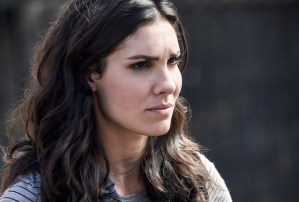 In the wake of the narrow escape, and having witnessed Sam’s anguish over Michelle’s abrupt death, Kensi grabs the ring off a flash-bang grenade, grabs Deeks and drops to bended knee to propose. Deeks protests the reversal of traditional roles, but Kensi reminds him it’s 2017. Pressed for his answer, he says it’s “a lot for a girl to process” — before they affirm their love and intent to live the rest of the lives with each other, as a happy Nell looks on. Meanwhile at the morgue, Sam visits his wife’s body, still agog that he has lost her. He tells Callen he needs to take some time off, to spend with his kids.

What did you think of the NCIS: LA finale? Will Sam ever be the same? And did the oft-attemped, long-awaited “Kensi” engagement offset some of the finale’s sadness?