Two familiar faces turned up in New Orleans on Friday’s episode of The Originals — with two very different agendas.

Let’s start with Davina, who whisked Klaus and Hayley off to the ancestral realm for a little history lesson on the Hollow. And once class was in session, Davina made it clear that she was not messing around, boasting about being the “only thing” standing between them and the Hollow. (Honestly, if she could have bent Klaus over a desk and spanked him with a ruler, I’m sure she would have.)

Anyway, it turns out the Hollow’s existence traces all the way back to New Orleans’ first-ever werewolves; in fact, the Hollow — nicknamed as such due to her insatiable hunger for death, chaos, etc. — is the one who created the werewolf curse in the first place. Given that they come from the same line of ‘wolves, Hayley (and Hope by proxy) is the Hollow’s only weakness, hence the reason she wants her out of the picture. (You know, in addition to that aforementioned hunger for death, chaos, etc.)

But just when Davina started to seem like a “cool” teacher — you know, the kind who sits backwards in chairs and really gets their students — she revealed the real reason for her visit: She intended to sacrifice Klaus in order to bind the Hollow. And she would have gotten away with it, too, if it wasn’t for that meddling kid. Yes, I’m talking about badass-in-training Hope Mikaelson, who appeared as if from nowhere to put Davina back in her damn place.

(I actually feel like Hope’s big moment was a nice callback to Season 1, when Davina killed those four witches in mid-air. No one expected to see someone of her stature pull off a sick move like that, either. Never forget Rule No. 1 of The Originals: Great power often comes in small packages.)

As if Davina’s return wasn’t enough to satisfy longtime fans, this week’s episode also featured a visit from Alaric Saltzman, last seen opening up a school for the supernatural on The Vampire Diaries series finale. He can say his “days of fighting monsters are over” all he wants, but he went full-on Indiana Jones in this episode — delivering ancient bones, blowing s**t up and going toe-to-toe with a possessed vampire — and he loved it.

He also exhibited a really sweet connection with Hope, likely because she reminds him of his own bewitching daughters. He seemed mesmerized by her abilities, especially the amount of witchcraft she’s managed to teach herself, and was eager to enroll her at his and Caroline’s school. (Klaus, on the other hand, seemed less inclined to send his daughter away. The look he gave Alaric when he said “Give my regards to Mystic Falls” was downright chilling.)

And because why not, here’s the face Klaus made right after he heard Alaric utter the word “Caroline.” Go ahead, dissect it as you will: 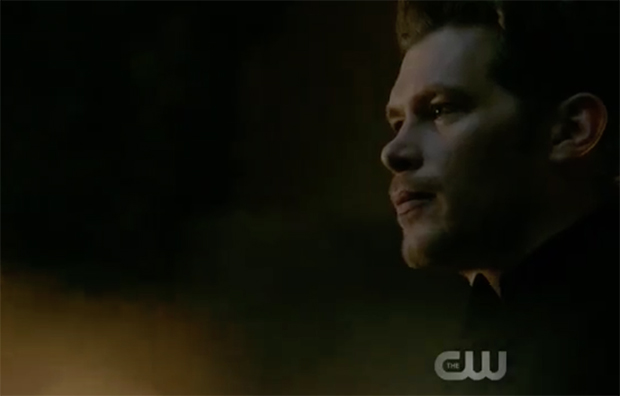 The episode ended on a pretty unfortunate note, with a possessed Sofya literally stabbing Elijah in the back, setting up a hell of a rescue mission next week.

Your thoughts on this week’s episode? Were Davina and Alaric’s visits worth the hype? (I vote yes!) Whatever’s on your mind, drop it in a comment below.