Archie, you have a new archrival.

The CW’s Riverdale has cast Charles Melton to play the role of Reggie, TVLine has learned exclusively. Melton, who will recur in Season 2, has previous TV credits on FX’s American Horror Story: Hotel (as the womanizing Mr. Wu) and Fox’s Glee. 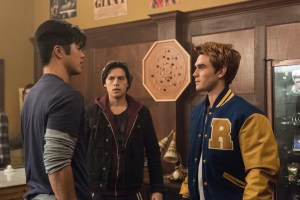 Melton takes over for Ross Butler, who played Reggie in Season 1. Reggie — a loudmouth bully who’s constantly in competition with Archie — is a core character in the original comics, but he was rarely seen on Riverdale due to Butler’s busy schedule. Butler is a series regular on Netflix’s teen drama 13 Reasons Why, and with that show getting a Season 2 renewal, Riverdale was forced to search for a new Reggie.

“We love what Ross did with the role of Reggie [this season], but because of his commitments to other projects, we couldn’t use him nearly as much as we would have liked,” creator Roberto Aguirre-Sacasa told TVLine last month when the recasting was first announced.

Butler endorsed the casting of Melton in a video posted to Twitter on Friday, thanking the producers for choosing another Asian-American actor to replace him:

Are you looking forward to more Reggie in Season 2, Riverdale fans? Sound off in the comments.