CBS’ Hawaii Five-0 closed Season 7 on Friday night by dropping two medium-sized bombshells… that could blow up into bigger storylines down the road.

Much of the hour was, as promised, action-packed, centered on Five-0’s pursuit of a non-stop truck carrying young girls on behalf of the sex trafficking ring introduced earlier in the season. Saving the girls required a bit of derring-do from Steve — as part of a plan the whole team deemed patently dangerous — where he leaped onto the roof of the moving truck, and then bore a hole into the roof to slip inside the cargo trailer.

After dispatching with an armed guard inside, Steve detached the cabin from the trailer, letting the latter slow down to a relatively safe stop, after which Steve put three bullets into the driver.

But as the team 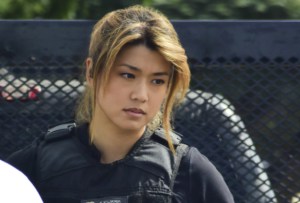 post mortemed their op, Kono — who has always been the most affected by this storyline — questioned if they had even “made a dent” in the kingpin’s operation, when there are so many other child sex trafficking hubs scattered across the United States.

When a party to celebrate Jerry getting his badge rolled around, Kono was a no-show — because, we would realize, she was on a plane, en route to Carson City, one of the aforementioned hubs, with the team’s not-so-reassuring words from earlier echoing in her mind.

The other twist came from Steve himself, who at the top of the hour had mentioned a trip to the doctor — though it was not to check on his/Danny’s liver, as he originally let his partner believe, but to look into some “spells” he has been having. It turns out that McGarrett did (and understandably!) get radiation poisoning from handling that dirty bomb months ago. So he will endure spells for now, and there is a “100-percent chance” he will experience side effects “down the road, years down the road,” he stressed to a worried Danny.

Could Steve’s sickness ultimately pave the way for Alex O’Loughlin’s exit a year from now, which the actor hinted at, strongly, in a TVLine Q&A? H50 showrunner Peter M. Lenkov seemed to dismiss that notion on Twitter Friday night, telling a fan making such a supposition, “I wouldn’t bet on that.”

Hmmmm…. I wouldn't bet on that. https://t.co/lsxvCBqXpQ

What did you think of Hawaii Five-0‘s Season 7 finale?