Put on your sunglasses: Sundance’s Top of the Lake is delivering some major star wattage in its second installment.

The new trailer for Season 2 of the Australian crime drama — titled Top of the Lake: China Girl and premiering this September on Sundance, with episodes streaming a day later on Hulu — shows police detective Robin Griffin (Elisabeth Moss) returning to the force after the trauma of last season. She’s put to work right away, though, when the dead body of an Asian girl washes up on the beach, packed into a suitcase. She enlists the help of a fellow cop played by Game of Thrones‘ Gwendoline Christie (hi, Brienne!), and the trail of clues leads them to a sleazy underground brothel. 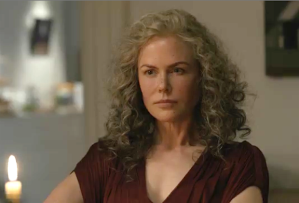 But Robin’s also getting to know the daughter she gave up for adoption years ago, who’s now a teen named Mary, played by Alice Englert (Jonathan Strange & Mr. Norrell). Mary was adopted by a gray-haired Nicole Kidman, who thanks Robin profusely: “Your baby has been loved by me very much.” But she’s worried about Mary’s creepy new German boyfriend, who says charming things like, “The destiny of man is to enslave women.” And the two story strands start to intertwine when Robin realizes she spotted that creepy boyfriend at the brothel…

Press PLAY on the video above for a sneak peek at Top of the Lake: China Girl, then hit the comments to share your first impressions.