It’s going to be a cruel summer, Riverdale fans.

After wrapping up the Jason Blossom murder mystery last week, Thursday’s season finale threw a bunch more thrills and (literal) chills at us: A suicidal Cheryl plunged into an icy river, only to be saved by Archie, and then set fire to her family’s Thorn Hill mansion (hot damn!); Betty and Jughead said “I love you” (aw!), but he also switched schools and fell in with the Southside Serpents (hiss!); Archie and Veronica had sex (yowza!); and, most heartbreakingly, Archie’s dad Fred was shot (noooo!) during an armed robbery at Pop’s, clinging to life in Archie’s arms as the season ended.

With all that to process, TVLine reached out to Riverdale showrunner Roberto Aguirre-Sacasa, who penned the finale, for some much-needed answers. Read on for his thoughts on a “much darker” Archie to come, the Godfather homage (!) tucked into Betty and Jughead’s storyline, what the arrival of Hiram Lodge might mean for Archie and Veronica (hint: not good things), and the “civil war” that’s brewing in Riverdale for Season 2.

TVLINE | Fred talked in the finale about Riverdale not being safe anymore… and then he’s the one who ends up getting shot at Pop’s. So you’re going to make us spend our whole summer worrying about Luke Perry?!
[Laughs] Yep, that is exactly what’s going to happen. 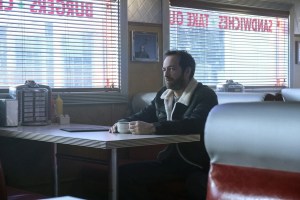 TVLINE | I know you won’t say whether Fred lives or dies, but either way, this has to affect Archie on a deep level, right?
For sure. Oftentimes, we say that Archie is the hero of our series, and that the series is going to be, in many ways, him going from a boy to the kind of man he’s going to be. And I think about the literal heroes I grew up with: Batman, Spiderman and things like that. So when we started talking about this happening to Fred, I said, “This will be as impactful on Archie as when young Bruce Wayne sees his parents gunned down, or when Spiderman’s Uncle Ben is shot and killed.” Those are galvanizing moments for those guys, and it will be for Archie. It’s going to set him on his real journey, ultimately towards heroism, but I think first to a much darker place than we’ve played Archie. Long gone will be the days of, “Music or football? Betty or Veronica?” It’s an Archie who’s seen his worst fears come true.

TVLINE | Is it fair to theorize that this wasn’t a random shooting, since Fred refused to sell his part of the drive-in land and remains in partnership with Hiram?
There are going to be a lot of theories, and a lot of suspects, on who did this. That absolutely is something that many people in Riverdale think — that this is not a random robbery, that there are darker motives at work. And that’s something that we pick up with right in the premiere. 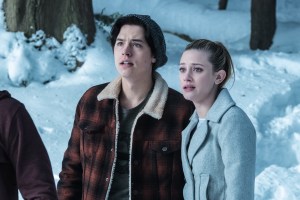 TVLINE | It was great to see Betty and Jughead exchange “I love you”s. But will Jughead being embraced by the Southside Serpents throw a wrench into their relationship?
Oh, for sure! Obviously, in Riverdale, we love our homages. One of my favorite movie moments — and one of our wonderful director Lee Toland Krieger’s favorites — is the end of The Godfather, when Diane Keaton is looking at [Al Pacino], and the door is closed. We thought it’d be really cool to do an homage where Betty is looking at Jughead as he joins the ranks of the Serpents. And that is absolutely a big, big story that we’re telling in Season 2. It brings a lot of drama to “Bughead.”

TVLINE | We didn’t see Hiram Lodge in the finale, but we know Mark Consuelos is coming. How does his arrival shake up Archie and Veronica? Hermione warned that Hiram and Fred will not get along.
That is one hundred percent correct. Whenever we can harness or reinvent something from the comic books, we always do that. And in the comic books, one very tried-and-true dynamic is that Hiram Lodge hates Archie Andrews. One of the reasons why Archie and Veronica got together is because we wanted them dating when Hiram gets there. So we’re going to honor that proud tradition of Hiram hating Archie, and also subvert it. And Mark is much more charming than the Hiram in the comics. For a while, we’re not going to know what his intentions are, if he’s truly reformed or not. Very quickly, we’re going to know he has a strong opinion about Archie, though. 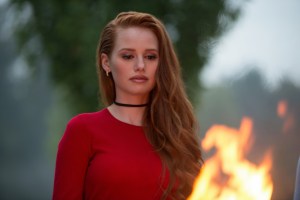 TVLINE | Cheryl’s story was really affecting in the finale. Was torching Thorn Hill the baptism she needs to start fresh? Will we see the bitchy, quippy Cheryl again in Season 2?
Yeah, in the finale, she sort of had a baptism in ice, and then a purification in fire. Those are really primal, elemental things we did to Cheryl so that she does come out more forged. She is very much going to be the character we know and love. But this time, she really has nothing to lose, because she’s liberated herself of all the shackles. For a lot of Season 1, Cheryl was tortured by her parents, really. They were quite cruel to her. I think we’re going to see, after the finale, a big power shift between Cheryl and Penelope. They’re going to be kind of locked in battle — these two very formidable, slightly unbalanced women.

TVLINE | We also learned that Betty has a secret brother she’s never met who was adopted. Will we meet him in Season 2?
I wouldn’t be surprised, and that’s all I’ll say about that.

Watch a deleted scene from the Riverdale finale, with a pregnant Polly returning to Riverdale High:

TVLINE | Finally, is there one word you can give us to describe Season 2?
I can describe it in two words: civil war.

Alright, Riverdale fans: Give the Season 1 finale a grade in our poll below, then hit the comments to share your Season 2 theories.