The following story contains spoilers from Thursday’s The Big Bang Theory finale, proceed at your own peril.

He likes it, and he’s finally ready to put a ring on it. But there’s a catch!

In Thursday’s Big Bang Theory finale, an unwelcome advance from his aggressive ex Ramona pushed Sheldon to travel cross-country and propose to Amy (finally making use of that engagement ring he’s been sitting on for two seasons). And her response to his grand gesture? A loud chorus of… crickets. Yep, Season 10 came to a close before Amy had a chance to say yea or nay to Sheldon’s long overdue overture (and the dumbstruck look on her face suggests perhaps her answer will be more ambiguous).

Regardless, the climactic twist marked a major turning point in the Sheldon-Amy love story and, below, showrunner Steve Molaro breaks down the cliffhanger and lightly teases the pair’s sure-to-be “delightful” nuptials. 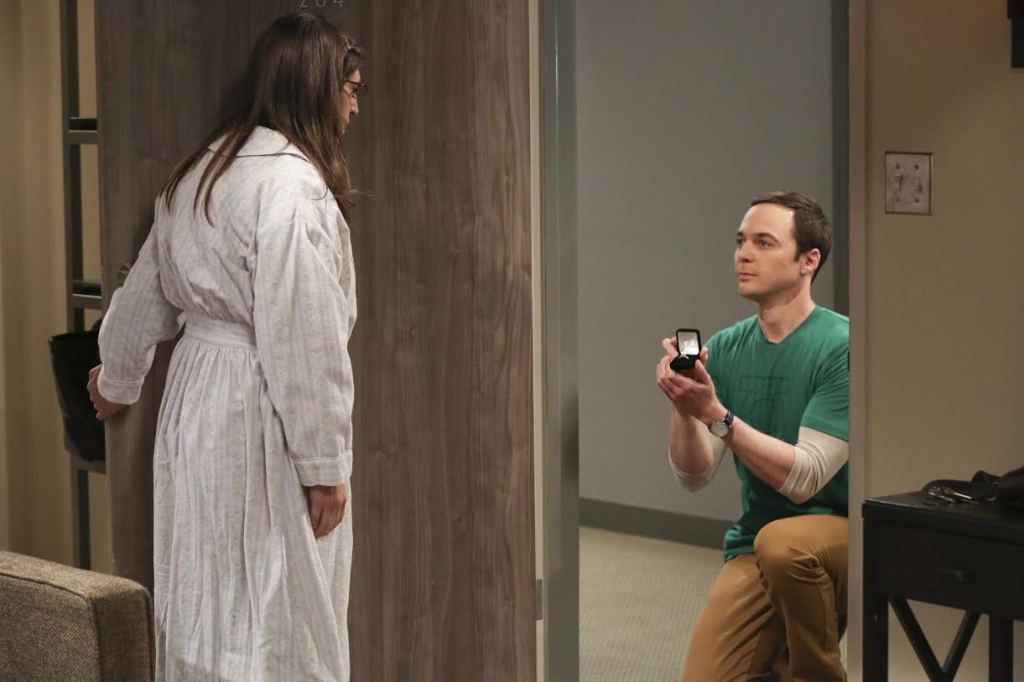 TVLINE | How long have you known Season 10 would end with the proposal?
He’s had that ring for a while, so him proposing has always been floating around in the ether. And as we were closing in on the end of our 10th season, it started to feel like that’s where we wanted to take it.

TVLINE | Is the Sheldon-Ramona kiss going to be an issue for Amy?
There’s a good chance it will come up. Sheldon is not one to withhold evidence. It wouldn’t be shocking to me if it’s something that he just matter-of-factly conveys to Amy.

TVLINE | I realize she didn’t actually say yes, but how excited are you even thinking about what a possible Sheldon-Amy wedding would look like?
I don’t know when that would be, but the thought of it is just delightful. Sheldon and Amy are such a beloved couple, and it is really fun to think about.

TVLINE | This episode was unique in that there was no B-story. Everything revolved around Amy and Sheldon. Why?
It was nice to end the season with everyone involved and rallying together around one central point. I thought it worked really well. I enjoyed seeing the gang rally around Sheldon and Amy. It gave the show a nice cohesive family-like energy.

TVLINE | Sheldon’s silent cross-country trek was quite amusing.
We really enjoyed taking our time with that montage. We knew it would be a little weird to just go on this adventure without knowing where he’s going or what’s going to happen. We talked quite a bit about whether that montage should have music. Ultimately, we watched it in silence and found it so compelling, just watching Sheldon, that we left it alone like that. Also, we didn’t want to tip off what was happening. If [the music] was anything about romance or love it would’ve [spoiled] the ending. I’m really happy with our choice to let it play out in the weird silence.